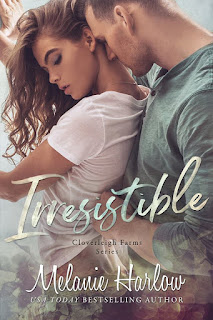 I've been quite excited for the Cloverleigh Farms series ever since Melanie Harlow announced it would be her next project, and she’s definitely gotten things off to a fantastic start with the first novel, Irresistible. While there are a handful of characters from the author’s previous books that do make an appearance here, it isn’t absolutely necessary for new readers to peruse those earlier releases—although if you love fabulously-written contemporary romances, Harlow’s books are, well, indeed quite irresistible (See what I did there?) so reading them all is actually a great idea.

Thirty-seven-year-old Declan MacAllister is Cloverleigh Farms’s chief financial officer and business manager AND a single father to three daughters. Oh, and he also happens to be quite gorgeous. So, it shouldn’t be all that surprising that Frannie Sawyer has a thing for him. Yeah, she may be ten years his junior AND the daughter of his boss, but she’s not a child and Frannie sees her as more than all that. She’s done being sheltered by her parents and she’s done with Mack pretending they should only be friends. When she goes all in, how long will he be able to resist?

I do love me a romance that has a single parent in it who keeps it real. Mack isn’t a perfect father; he has his struggles but he does his best to be what his girls need. He puts them first, so I totally understand where he was coming from when it came to his waffling on pursuing something more with Frannie. Could he have handled things better? Yep, but again, the guy is only human and he was bound to flub things up more than once. His daughters—Millie (11), Felicity (8), and Winifred (4)—were scene-stealers, and proved once again that children notice more than you think they do.

Frannie was one special woman. I loved seeing her come into her own and find a place for herself in a world that seemed to have seen her as someone who constantly needed coddling. She held her own and she refused to be treated like a helpless child or someone who didn’t know her own mind and heart. Her evolving relationships with her parents and sisters—at least the sisters who were featured in this series starter—had elements that I could relate to. Frannie loved her family and Mack and his girls, but she never forgot to love herself, too, and that was a big reason why I so adored this book. Melanie Harlow’s got herself a winner with Irresistible, which gets five stars. ♥