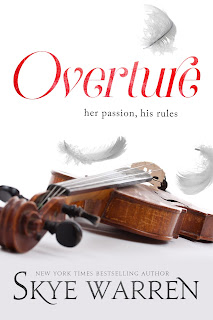 I KNEW this book was going to end in a cliffhanger! ARGH! Yet, knowing or not knowing this was going to be cliffy--which basically makes it the first in a new series--wouldn't have made a difference to me. Yes, I bitch and moan about cliffhangers being evil, but there are authors and books that make the frustration and pending impatience while waiting for the sequel worth it. One of those authors for me happens to be Skye Warren. Her latest release is the opening salvo in her new North Security series--and with that title, I'm hoping we've got more than two or three books since there are three North brothers--and Overture was this decadent tale of forbidden love and heartbreaking secrets between a seventeen-year-old musical prodigy and her thirty-four-year-old legal guardian.

When she was twelve, Samantha Brooks saw her father die of a heart attack and became the ward of Liam North. Six years later, Samantha is on the cusp of adulthood, and there are only a few short weeks until she turns eighteen. This milestone will see her embark on her very first world tour with a famous symphony as one of the violinists. It will also see the end of her relationship with Liam as his ward. Truth be told, Samantha wishes her turning eighteen would signify the beginning of something different with Liam, but she doubts that he would ever see her as anything more than an obligation. Yet she begins to wonder why there are times he looks at her with something other than the usual indifference. But Liam needs to stay in control even if it means pushing her away.

There was an undercurrent of tension throughout this book, parts of due to the status of Liam and Samantha's relationship of guardian and ward to whatever else they could have if only they'd take the risk and other parts brought on by the secrets that Liam was keeping from Samantha. Just a quick FYI: yes, the story starts out with Samantha being seventeen, but she is eighteen before anything sexual takes place between her and Liam. The element of the forbidden makes for an even more enticing read when interspersed with the hint of suspense lingering. Aside from Samantha and Liam, Liam's younger brothers, Josh and Elijah, were also intriguing, and I have hopes they'll get their own stories once their oldest brother's wraps up.The waiting begins! Five stars for Overture. ♥