Review: What He Never Knew by Kandi Steiner (What He Doesn't Know #3) 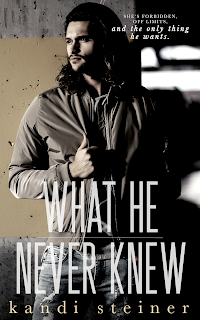 "Reese, from the moment I met you, I knew you would change my life."


The label "teacher-student romance" doesn't suffice when it comes to the most basic of descriptions of Kandi Steiner's latest novel, What He Never Knew, which is the third release in her What He Doesn't Know series. While I think this book can be read well enough as a standalone, I'm going to highly recommend that the three books in the series be read in order, especially given that Charlie Pierce, the woman with whom Reese Walker was in love in the first two novels, is a supporting character in this third one. I'm not saying readers should absolutely read the What He Doesn't Know and What He Always Knew in order to enjoy What He Never Knew, BUT if you want to be able to better understand Reese and his backstory, I'm seriously suggesting that the series be read in release order.

You'd think that getting his heart broken by the only woman he's ever loved would have taught him to not covet those that he has no business wanting, but twenty-one-year-old Sarah Henderson calls to him like no other. At thirty-seven, Reese Walker knows the sixteen-year age difference between them alone should have him stepping back, but add to that her being his student and her being the niece of his boss, and Reese is walking an all too fine line. The constant heartache he carries with him should be more than enough to remind him to keep his distance from Sarah, but he recognizes her pain and maybe together they'll heal...or end up even more broken than before.

Fair warning: there is an incidence of assault that occurs in this story, and while it isn't graphic in its description, there is no sugarcoating it, so please be aware. Reese and Sarah's love story is one of resilience and redemption, of two people finding each other at just the right time even though the odds seemed stacked against them. I desperately wanted Reese to find his own happiness after everything that happened in the original two books that were released, and he more than earned it here with Sarah. Together, these two gathered up the courage to move forward and embrace the possibility of not just a present but of a future with one another. I confess that I was kinda-sorta-maybe peeved at Charlie here. I got her reasons, but she should have known her boundaries. Ultimately, What He Never Knew is Reese and Sarah's story, and what a truly beautiful five-plus-starred story it is. ♥

Read my reviews for the What He Doesn't Know series:

What He Doesn't Know (book one) - five-plus stars - My Review

What He Always Knew (book two) - five-plus stars - My Review

Purchase What He Never Knew on Amazon.