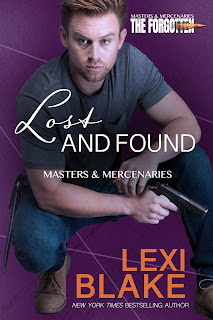 Ooh! Lexi Blake definitely took her Masters & Mercenaries: The Forgotten spin-off series to a new level with the second novel, Lost and Found. The Lost Boys are still very much lost but have found purpose, thanks to greater brotherhood they have with McKay-Taggart. Thirty-six-year-old Owen Shaw, however, hasn’t quite gotten over the guilt that weighs on him regarding his actions right before his memory was erased by Dr. Hope MacDonald. He may have been former SAS but he’s nothing more than muscle nowadays, not really being trusted with the reins of any ops. A plan is already in place for them to get close to one of Dr. MacDonald’s former colleagues, thirty-year-old Dr. Rebecca Walsh, who is supposed to have received a package from her late mentor. Once Owen meets Becca face to face, though, the plan changes. Owen may seduce his way into Becca’s bed in order to get the intel that they need, but he never thought she’d find her way into his heart. Is Becca collateral damage, a co-conspirator, or Owen’s forever?

What wasn’t to love about this book?! Owen and Becca were characters who seemed to be better of as loners, that is, until they meet and it was clear from that point forward just how much chemistry these two had. As connected as they were, however, it was obvious that the time was going to come wherein Owen was either going to have to ‘fess up about who he really was and what he and his team were doing or Becca was going to stumble upon the painful truth that she was a mark. Still, my heart couldn’t help but break when secrets were revealed because how the heck were they going to resolve everything? Yeah, I’m not going to tell you what happened, but suffice it to say that this book doesn’t just have the romance and suspense aspects down pat but the action parts were quite thrilling. While Owen and Becca do get their happily-ever-after here, just like with book one, the series’s story arc regarding Levi Green and restoring the memories of the Lost Boys is still ongoing. So exciting! Lost and Found easily snags five stars. ♥