Review: Sealed With a Kiss by Carly Phillips (Ty & Hunter #2) 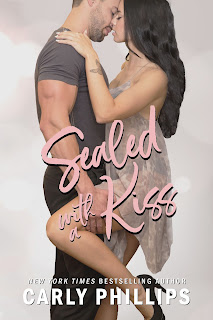 Sealed With a Kiss is the second novel in Carly Phillip's re-released and re-packaged Ty & Hunter series, having been originally published in 2007 via HQN, an imprint of Harlequin. This can be read somewhat independently of the first novel, Cross My Heart, although Daniel Hunter and Molly Gifford's love story does actually have its beginnings in that series starter. This second book has more of a mystery feel to it compared to its predecessor since it was pretty obvious in book one who the villain was. Here we have Hunter and Molly post-"breakup", although I'm using that term loosely since they weren't really in what I'd consider a committed relationship before.

Molly Gifford made a conscious choice when she rejected Daniel Hunter's offer to go with her after making the decision to pack up and leave Hawken's Cove. Eight months later, she's in Dentonville, Connecticut and living with her recently discovered birth father and the grandmother and half-sisters she never knew about. When her father is arrested for a murder she knows he couldn't have committed, Molly realizes that his best chance at proving his innocence is the best lawyer she knows, Hunter--the same Hunter whose heart she broke when she left him behind. Hunter decides to take on the case, but once he's done his job, it will be his turn to walk away from Molly.

I didn't like Molly in the first book, and I sure as heck didn't like her in this second one either. There was just something abrasive about her personality, but more importantly, her treatment of Hunter was horrible. Do I think it was selfish of her to want to find herself? Nope, but the way she went about that and everything else had me wondering why Hunter felt as strongly about her as he did. And just like the first book, this suffers from way too many third-person viewpoints--Molly's, Hunter's, Molly's father, Molly's youngest sister... I wouldn't have been surprised if Ollie the bird had a POV, too. So yeah, not a fan of Sealed With a Kiss, although to be fair, the mystery here was more intriguing than the one in Cross My Heart even if figuring out who killed the victim wasn't too difficult. Since I never read the book when it was originally released, I can't pinpoint if there were any changes made to this new edition. While I didn't like Molly, I did like the story and Hunter and everyone else. Three stars. ♥