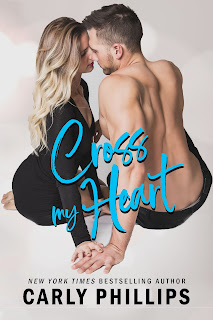 Originally released in 2006 under Harlequin's HQN imprint, Carly Phillips has is re-releasing Cross My Heart, the first in her Ty & Hunter series, as a self-published novel. This is the story of a rekindled friendship and finally taking a chance on a love that began a decade ago. Tyler Benson, Daniel Hunter, and Lilly Dumont became the best of friends as teenagers when Hunter and Lilly were placed under foster care with Ty's mother. When they feared that Lilly's life was in danger from her uncle who wanted to get his hands on the trust fund her late parents left her, Ty and Hunter put together a plan that would save Lilly's life--even if it meant her walking away from them forever.

Fast forward a decade later and Lilly is now Lacey Kinkaid, owner of her own cleaning business in New York City. She's shocked when Ty shows up on her doorstep, and doubly so when he tells her she needs to return to their hometown of Hawken's Cove in upstate New York. Lilly's Uncle Marc is about to have her declared legally dead and have her trust fund turned over to him. Ty hopes Lilly will lay claim to what is rightfully hers--and maybe this could be their chance to pursue their long-held feelings for one another. However, not everyone is thrilled with Lilly's sudden resurrection, and they'll do everything they can to make sure that she doesn't reach her 27th birthday...

I've often enjoyed Carly Phillips's books, but this one felt way short of my expectations. I never got to read the original incarnation of this book (or the second one in the series), so I can't really tell you what changes, if any, were made. However, what I can say is that reading this romance and being able to enjoy it fully may require a suspension of disbelief, and well, this isn't a fantasy or paranormal read, so unfortunately, I wasn't able to do any sort of disbelief suspending. There was also the fact that this story was told from the third-person point of view of not one, not two, not even three characters! Nope, there were at least five viewpoints: Lilly/Lacey, Ty, Hunter, Molly Gifford (the fellow lawyer Hunter likes and the soon-to-be stepdaughter of Uncle Marc), AND Marc Dumont.

There were just way too many variables to this story that had me scratching my head wondering if a whole host of characters here were naive or lacking in common sense when it came to certain events, particularly, Lilly's "death" and the aftermath, her life as Lacey, and then all the attempts at her life once she returned to Hawken's Cove. Would a seventeen-year-old really be able to survive and then flourish as much as Lilly did considering she led a pretty cushy life prior to her parents' deaths? How much investigating did the authorities in Hawken's Cove do, especially given that she continued to use her social security as Lilly even when she was Lacey? I wondered why she didn't go back to being Lilly since she was never legally Lacey. Loose ends galore. 2.5 stars for Cross My Heart. ♥