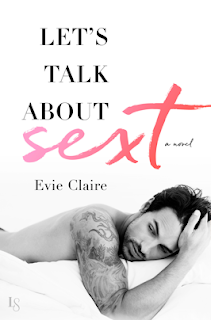 As a policy, I try my damnedest best to never DNF (did not finish) a book that I'm scheduled to review. So, I'll take a break or two or more if necessary in hopes that whatever's not working for me at that very moment will look more palatable later on. That doesn't always work, of course, which then leads to me having to give a book a not-so-great rating and a less than stellar review. Unfortunately, that was the case with my first-ever read from Evie Claire.

Let's Talk About Sext is the first in the series by the same name, and it's basically about a woman who thinks she's better than almost everyone else around her, including the guy that she's supposedly falling for. I'm all for strong women, whether it be in real life and in fiction. Who wouldn't want to break those proverbial glass ceilings and pave the way for other women in whichever field is ripe for the picking? I love women who have confidence and know what they're capable of. I'm not a fan, though, of anyone who thinks she's God's gift to the rest of the world.

Phebe Stark (whose first name I thought was a typo because I thought it was supposed to be "Phoebe") was not likable. At all. I couldn't even understand why Brody Cantrell wanted to be with. At all. The woman had no redeeming qualities, and while Brody was okay, he lacked a certain degree of oomph to make him the sort of romance hero that was swoon-worthy. I didn't feel the connection between the two of them, and while there were certainly some entertaining moments, the lack of likability of the heroine alongside the missing chemistry had me taking timeouts. Sadly, Let's Talk About Sext just was not for me, but maybe it'll work for someone else. Two stars. ♥