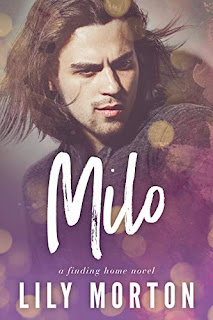 “So, if I tell you that I don't think I'll ever grow bored of having one person in my bed if that person is you, you won't freak out? When I tell you that there is no room for anyone else in my head at any time? That you fill me up all the time, in bed and out of it, so that all I can think of is you? That I can't remember a time when you didn't occupy some part of my mind, but now you're lodged in all of it?”


After reading Oz, the bar was set high for whatever would come next in Lily Morton's Coming Home series, and Milo kicked that bar into the stratosphere with its heartwarming story of a young man who regains his footing and confidence and finds true love with a man who once looked at him like a younger brother but now sees him as much more. This second Coming Home book can be read independently of the first one, but because there are recurring characters AND because the series starter was just as awesome, I suggest you read both novels in order.

Milo Ramsay is rescued from his emotionally abusive boyfriend by his brother's best friend, Niall Fawcett. Five years on, twenty-seven-year-old Milo has found home in Chi an Mor and is more than happy spending his time restoring old paintings belonging to the estate of Lord Ashworth. Thirty-nine-year-old Niall lives on the property as well, and remains protective of Milo and seems oblivious of the younger man's feelings for him. When the two men become a dynamic duo of babysitters for their goddaughter, the spark between them becomes unavoidable.

I absolutely adored both Milo and Niall! I loved how these two formed an actual friendship with one another before they became anything more. The added complication of Gideon--Milo's older brother and Niall's best friend with occasional benefits--certainly made things more interesting. I know the situation with Niall having been with Gideon before being with Milo may not be everyone's cup of tea; for the record, Niall and Gideon were not in a relationship nor did they have any sort of commitment to one another, but I get that some may not be comfortable with the idea of one guy having been with two brothers (not at the same time!). This story, though, is worth taking a chance on with the dynamic between Niall and Gideon and Gideon and Milo makes for some engrossing reading.

Lily Morton's reads do not shy away from angst, which is just one of the reasons I so enjoy reading her books. But the angst isn't a case of drama for the sake of stirring the pot within the core group of characters. There were a number of moments in the book where I would ask myself what I would have done in the same situation, and I love it when an author gives me something to contemplate rather than me mindlessly reading the text. Milo and Niall were perfectly matched, and I appreciated that their love story wasn't perfect and that they had their respective issues to overcome. There was a point in the story that I got teary-eyed as they tried to resolve the complexities of their relationship, and weirdly enough, I have a thing for books that make me cry (for the right reasons, of course!). Milo gets five-plus stars, and now I'm all curious as to whose story I shall be waiting for next! ♥

Read my reviews for the Coming Home series: