Review: The Chase by Elle Kennedy (Briar U #1) 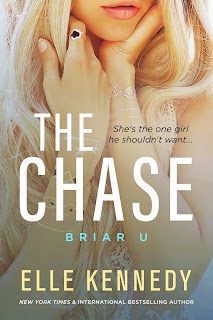 Bestselling author Elle Kennedy skates into the world of college hockey with her Briar U series, a spin-off of her much-loved and highly popular Off-Campus series, although this new series can be read independently of the original one--but why not make it more fun and read ALL the books, right? Plus familiar faces may be showing up in Briar U. Anyway, this kicks off with The Chase and features Briar University transfer junior and hopeful fashion designer Summer Di Laurentis and senior hockey player and aspiring video game designer Colin Fitzgerald. If Summer's last name sounds familiar for those of you who've read Off-Campus, it's because Summer is none other than the younger sister of Dean Di Laurentis, whose story was told in The Score, book number three in Off-Campus.

Summer has had a thing for Fitz from the moment she met him, but as attracted as he is to her, he can't help but waffle about what to do with said attraction, leading him to keep his reactions to her in check. So, what's a guy to do when he not only agrees to let Summer be the fourth roommate in a place he shares with two other hockey players but also gives his best friend the go-ahead to ask Summer out since he claims he isn't interested in her? To make matters worse, Summer seems to have gone from being all warmth and sunshine towards Fitzy to cool and distant. There's no way anything between them could ever work out anyway. They're very different people and neither one's type. So why is it that Fitz now finds himself wishing he pulled her closer rather than pushed her away when he had the chance? If there's any chance for him to right his wrongs, Fitzy will have to chase Summer...

I seriously liked Summer! She was quirky and fully embraced her quirks, but she was also sensitive and had an air of vulnerability behind that confidence of hers. Her back story made me want to give her a hug. And then there was tatted up, geeky, and hunky Fitz, who was quite interesting given that he seemed to be a walking contradiction, but there were definite moments that I wanted to smack the guy upside the head for his bad choices. Still, he won me over. I'll be honest, though--it was the supporting characters that had me absolutely curious, namely Hunter Davenport, Mike Hollis, Nate Rhodes, and Brenna Jensen--the first being Fitz's best friend, the first two being Fitz and Summer's roommates, and all three guys being Fitz's teammates, and the only female being Summer's insta-bestie, all of whom make me giddy with excitement as to what awaits readers as the series moves forward. With Elle Kennedy's witty writing, The Chase turned out to be an enticing 4.5-starred series starter. ♥