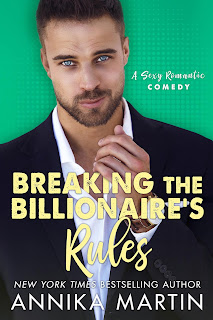 Breaking the Billionaire's Rules is the third standalone novel in Annika Martin's Billionaires of Manhattan romantic comedy series. This enemies-to-lovers romance pits high school rivals and foes against each other ten years after they last saw one another in the exclusive performing arts school they both attended. Mia Corelli and Max Hilton may have worked well together doing one summer production years ago, but once the curtains drew to a close, so did whatever fledgling friendship they had. The lines are drawn between them and they pushed each other's buttons like no one else's business, enough for Mia's utter dislike for him overshadow the nicer memories she may have had of their time together. She's never forgotten the boy that seemed to go out of his way to humiliate her.

The last thing Mia wanted was for the next time they would see each other be with her working for the Meow Squad dressed in a cat costume serving him lunch. One time would be bad enough but the fact that she would be doing it regularly is horrifying enough for her to listen to her friends come up with a plan to bring Max to his knees. Using a handbook with rules he came up with when he was twenty is genius, especially if it's a good way to get back at him on behalf of her friends who fell victim to the losers who followed those same rules. Mia intends to be the cat that puts a dog like Max in his place, but then she gets glimpses of the Max she remembers from ten summers ago. Mia wanted to break this billionaire's rules, but she may end up breaking both their hearts instead.

There's something to be said about romances that fall under the enemies-to-lovers trope. You want that simmering tension to be a good mix of love and hate and a whole lot of lust, and we get that with Mia and Max but it's done in a way that it isn't thrown in your face. Instead, the awareness they have of each other grows with each passing encounter now that they're adults that you can't help but anticipate when they finally just give in to everything that they're feeling. I loved the little twists that Annika Martin threw in to give this story even more oomph plus she's put together a great group of supporting characters who add to the humor and we have appearances from Henry and Vicky Locke--with Smuckers!--from Most Eligible Bachelor and Lizzie Cooper minus Theo Drummond from The Billionaire's Wake-Up-Call Girl. Fingers crossed Breaking the Billionaire's Rules won't be the last in this universe, especially now that I'm curious about Parker Westbrook, Max's friend and business partner. Five stars! ♥