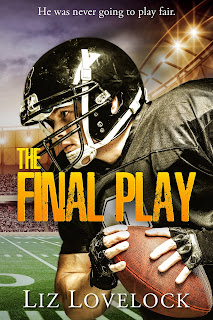 The Final Play is a novella by Liz Lovelock that has a blurb that makes it sound like an enemies-to-lovers story with a sports feel to it courtesy of the cover, and a mention of this being a second-chance romance. Okay, the main characters--former best friends April and Spencer, although their being "former" besties wasn't due to any sort of disagreement or quarrel but a simple case of no communication on both sides--aren't really enemies and there isn't really anything sporty about the story unless you count Spencer being a professional football player, but it's not like he actually does any sort of football action in the book. Then there's the "second-chance" thing, and well, when you mention something like that, in my head, they had their first shot at something before but flubbed it up, so now they've got another shot at it, but April and Spencer were never more than just friends, so... Yeah. Weird.

So here's the thing: I hate giving books low ratings and I hate having to put into words how much a book didn't click with me. I'm sure someone out there who loved the book will think I'm being an overly judgy asshat who simply didn't appreciate whatever they appreciated in the story and characters. But I just didn't feel this from the get-go. April didn't tell Spencer she was in love with him for fear that he wouldn't leave their hometown and pursue his dreams. Oookaaay. So, that's a whole lot to presume given that she didn't know whether or not her romantic feelings for her best friend were reciprocated. Yeah, okay, fine. You decided not to tell him, but the lack of communication? That goes both ways. Then there was the whole passive-aggressive thing from Spencer. This didn't work for me, and the main reason I'm giving The Final Play two stars and nothing lower is because it ended quickly. ♥

Purchase The Final Play on Amazon.