Audiobook Review: Out in the Offense by Lane Hayes, narrated by Michael Pauley (Out in College #3) 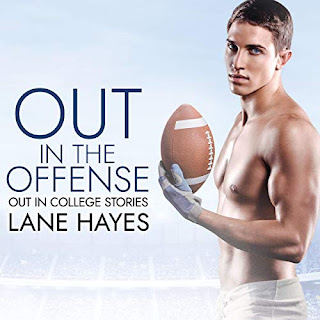 I've had the pleasure of listening to all of Lane Hayes's audiobooks, but there's just something special about the audio editions for her Out in College series. With Michael Pauley taking on narration duties once again, Out in the Offense isn't as good as the first two audiobooks--it's BETTER. No, wait. I take that back. It isn't better. It's the best in the lot, and that's saying something because I absolutely adored both Out in the Deep and Out in the End Zone. This series seems to get better with each new audiobook that's released, leaving me both excited and anxious for the fourth one since the bar is astronomically high, but since that book isn't even out yet, I'm going to continue to heap a whole lot of love on the most recent one to come out. And no, pun SO not intended in that last sentence!

Christian Rafferty has a lot on his plate: he's in his senior year at Chilton University, he's the star quarterback and captain of the football team, and his father expects him to go to law school. Failing his statistics class isn't an option, especially since he's already failed it once before. He has no other choice but to avail of the services of a private tutor, but it can't be someone from Chilton, so one of his coaches recommends recent Long Beach State graduate and former varsity wrestler Rory Kirkland. Christian finds himself immediately smitten by the openly bisexual Rory, but Christian is very much in the closet when it comes to his being gay and getting involved with his tutor is a bad idea. Maybe if Christian switches from defense to offense, he'll finally see that Rory is worth the risk.

I loved Lane Hayes's writing and I loved Michael Pauley's narration. I meant it when I said before that these two are like combining a pterippus and a unicorn and getting one heck of a mythical creature that will gift you with rainbow-hued treasures in the form of audiobooks. Weird, I know, but I think of Hayes and Pauley as my favorite audiobook-creating dream team, and with Hayes's penchant of having the same narrator for the duration of a series, I foresee great things ahead since the Out in College series is far from over (and I may or may not have wished that it would never, ever end ala Nora Roberts's J.D. Robb-penned In Death series). If you've yet to listen to anything by these two, listen to the Out in College audiobooks, especially Out in the Offense ASAP. Five-plus stars! ♥

Purchase Out in the Offense on Audible | iTunes.