Review: The Guy with the Suitcase by Chris Ethan (Once Upon a Guy #1) 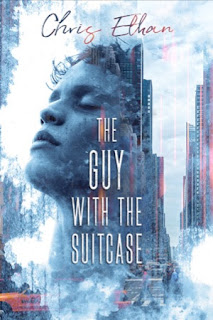 The Guy with the Suitcase is my third read from Chris Ethan, and so far, it's the standout. What I read was the book's second edition, and not having read the original release, I have no idea if there were any changes or additions made to the text. This new adult (NA) story is about two twenty-year-olds, Pierce Callahan and Rafael Santos, both homeless, Pierce having been thrown out of the house six months ago by his ultra-conservative parents and Rafe running away a year ago in order to protect his mother. When their paths cross the first time, it's with Rafe getting caught trying to pilfer Pierce's prized suitcase. The next time they meet, circumstances are far more dire. Soon, it becomes clear that these two are better off as a team than two individuals trying to survive the mean streets of New York City. Not a whole lot comes easy for either of them but could Fate surprise these two?

This is a story with a whole lot of angst and a dash of romance. I'm an admitted angst addict but even I felt a wee bit overwhelmed with how much angst was in this book, and a lot of it came from a lack of communication between Pierce and Rafe. The story itself was both heartrending and hopeful, especially since these two young men became each other's greatest cheerleader and main source of support. As far as the text itself is concerned, there were parts that felt repetitive--friends telling the two guys to find a room, Pierce and Rafe shouting whenever things weren't going their way, etc. I did appreciate, though, the harsh truth of homelessness that the author evoked in the story, as well as the difficulty of trying to find help for Rafe's condition, although I wish that had been delved into some more. Also, this story is set in the US and Boxing Day being more of a Commonwealth holiday, I wasn't all to sure why the place where Pierce was working at would have been closed. Overall, The Guy with a Suitcase was an endearing and inspiring read but not as romantic as I expected. I'm giving this one 3.5 stars. ♥

Purchase The Guy with the Suitcase on Amazon.