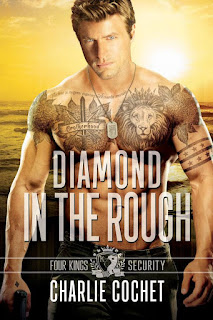 “Has anyone informed you, you're a sarcastic ass sometimes?”

“What words would you use to describe me, then?” King led him down Memorial Parkway toward the side of the street lined with trees. “Keep in mind I killed nine guys for you.”


Shhh! Don’t tell any of the other guys that make up Four Kings Security I admitted this out loud but Ward Kingston reigns supreme over my heart. Ever since he made his presence felt in the series starter, there was something about King that caught and held my attention every single time he appeared. The man was quiet but intense and his protective nature was ingrained in his very person, especially when it came to those he included within his circle. So, when his story was hinted at in the third novel, I had all these theories and ideas in my head as to who was best suited for our King, and let me tell you this: twenty-five-year-old genius and self-confessed geek Leopold de Loughrey was as unexpected a choice as you could get, but boy, oh boy, did his pairing up with forty-one-year-old King turn out to be endearing and entertaining fare. Of course, we’ve got the first three couples making strong appearances, but while King is the last among the original four Kings to find love, Diamond in the Rough is not the last in this universe.

The last thing Ward Kingston wanted was to return to the world he left behind when he was discharged from the military, but he couldn’t refuse General Leon de Loughrey when the man he considered a friend reached out to request that King watch over the general’s son, Leo. A software engineer and undeniable whiz when it comes to coding, Leo had very little choice when he was brought in to work on a top secret project that required his talents. He’s nothing more than an asset, and while he’s a valuable one at that, he’s also seen as a nuisance of sorts, trying the patience of those who were tasked to keep him in line. King, however, recognizes Leo’s anxieties and steps in to ensure that Leo has what he needs. When Leo’s life is put in danger, King brings in the full force of Four Kings Security. In a short amount of time, King and Leo’s bond become unshakeable. King doubts he’s capable of being what Leo deserves, but what he does know is that he’s more than willing to do whatever it takes to keep the young man he’s falling for alive.

Confession time: I cried by the time I had reached the end of this book. Another confession: several points in the story had me weepy. I honestly thought nothing could come close to my adoration of this author’s THIRDS series, but Charlie Cochet has created this series that has men who are willing and able to put their lives on the line first for the country and then later for the protection of their clients. The men of Four Kings Security are undoubtedly brave and confident and physically incomparable to the vast majority, but Cochet’s given each of them a far more vulnerable side, making them human and flawed and needing love and redemption just like anyone else. With King and Leo, Cochet ensured that the series would end on the highest of highs but also leave readers with a sense of hope going forward since there are other supporting characters who still need to get their stories told. With pulse-pounding suspense and action and heart-thrumming romance, Diamond in the Rough was everything I hoped it would be. Five-plus stars. ♥

Purchase Diamond in the Rough on Amazon.