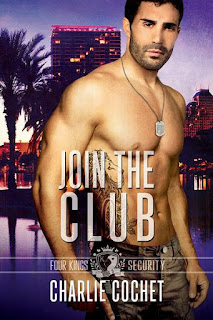 “I love you, Eduardo Morales. Love how damn ornery you are. Love how passionate and expressive you are. I love all your little quirks, like your obsession with good coffee, expensive shoes, and ability to drive your cousin batshit crazy. Baby, you are something else.”


Kylie Minogue said it best: "I should be so lucky in love." In the case of Join the Club, the third full-length novel in Charlie Cochet's highly addictive Four Kings Security romantic suspense series, we should all be so Lucky--as in Eduardo Morales, aka Lucky, aka one of the Kings who co-owns the much sought after and in demand security company in Florida--in love, and that's exactly what he is here. Who's Lucky's guy, erm, I mean the lucky guy? Forty-one-year-old police detective Mason Cooper, head of Major Crimes, and ex-boyfriend of Anston "Ace" Sharpe, aka Ace, aka Lucky's cousin and also one of the Kings. Are you keeping up? Now, you don't necessarily need to read the first two novels in the series, but I'm begging you on all that is holy to please do the right thing and read them. The major characters--King, Ace, Red, Lucky, Jack, and Joker--and a few others recur in all the books, plus there are a couple of minor story lines that do play out throughout the series. And well, I'm a Charlie Cochet fangirl and I would be remiss if I don't, at the very least, encourage you to check out what you are missing.

Join the Club is the story of Eduardo "Lucky" Morales and Mason Cooper. The two have had an ongoing flirting thing, but one close call in a vehicle and a deemed act of betrayal in a club has them wanting to be as far from one another as possible. Neither is really looking for a relationship, and they're quite upfront about believing that attempting at anything more with each other would only lead to heartache. But when Mason is suspended from his work at the police department, he turns to King Ward to ask for a temporary job to help keep his mind of the Internal Affairs investigation and how long the suspension may take. Surprisingly, King agrees and immediately teams him up with none other than Lucky. They may have looked like a disaster waiting to happen in the beginning, but Lucky and his Cowboy surprisingly work--professionally and, dare either one of them admit it, personally. However, there are things in their respective pasts that could have them rethinking of even considering being together is a good idea. Will it take an unexpected threat for them to realize that they truly are meant to be?

I adored these two! Gah! They were fun and flirty but they could also be sweet and serious, and the more time they spent with each other, the more it become obvious to the two of them--because, hello, everyone else seemed to get that they belonged together!--that they were worth the risk of possible heartache should things go south. I like the bits and pieces readers get of the six guys who make up the very core of Four Kings Security in each book, so that when their story is ready to be told, the anticipation is at its precipice. I appreciated that when it came to Lucky and Mason's story, there wasn't just one particular case that they were handling but a couple that highlighted that these two shared a connection that couldn't be denied and the sort of chemistry that had me wanting to smack their heads together so that they would see sense and get on with giving in to their feelings. From the direction of the story to the participation of the rest of the characters, Join the Club turned out to be one of my favorites, not just in the Four Kings Security series, but from Charlie Cochet's current books. Five-plus stars! ♥

Purchase Join the Club on Amazon.