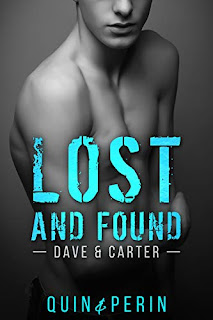 I first came across Dave and Carter in Take It All, a collection of short but steamy encounters starring three different couples. A quick aside: There's a bonus story that came out a day after that original collection featuring a fourth couple. Okay, moving on... Dave and Carter's first time together plays out in The One With Daddy, and now we've got a continuation of their story in Lost and Found. While their introductory tale was more of a short story, here we've got a novella, and if there wasn't any romance--but a heck of a lot heat!--going on before, there's a nice mix of heat and heart between Dave and Carter as they try to figure out if what they actually have is worth fighting for.

Carter was only nineteen when he first dared to call his best friend's father "Daddy"; Dave was thirty-eight--twice Carter's age--when he finally gave in to his illicit desires and had sex with his son's best friend for the first time. What was supposed to be a one-time thing slowly but surely starts to feel like...more. Carter is just starting college and should be living it up like the rest of his peers, but he craves the discipline and order that Dave brings to his life. As much as Dave lives for the moments he shares with Carter, fears, insecurities, and assumptions could lead them to make decisions they believe are best but could also end up costing them broken hearts and hurt feelings.