Review: Only Love by Melanie Harlow (One and Only #3) 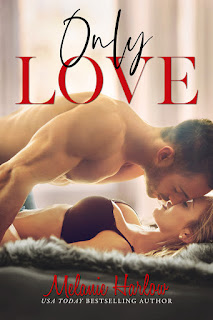 Talk about a series bouncing back just in time for it to close out! I loved the start to Melanie Harlow's One and Only series, but as much as I loved the male main character in book two, it did falter. And now we've got the series ender, and what's not to love about Only Love?! This had Harlow's patented brand of lighthearted humor with just a pinch of angst, but I have to admit that what I felt made it stand out as much as it did to me was one particular elderly supporting character who had a penchant for stealing scenes and, in the process, she stole my ol' heart too.

Stella Devine had a feeling her thirty-third birthday would be a memorable one. The signs were all there that her boyfriend would pop the question; instead, Stella finds herself questioning where she got it all wrong after he breaks up with her. Maybe a week with her grandmother will help, not that she was guilted into making the four-hour drive to Hadley Harbor from Detroit. She's worried that maybe her grandmother is experiencing health issues. The last thing she expects, though, is a whole lot of matchmaking with her grandmother's skittish neighbor.

Ryan Woods was proud of his service in the marines, but his time there has left him with scars deeper than the eye could see. He keeps his distance from almost everyone, not allowing anyone to get too close or delve too deeply. Even when his sweet neighbor tries to thank him for his helping her with repairs and landscaping, Ryan limits their conversations and doesn't take her up on her invitations to dinner. And then her beautiful granddaughter arrives, and like it or not, Ryan can't seem to help himself. But he knows a light like Stella doesn't deserve Ryan's darkness.

As frustrating as Ryan could get at times, I honestly loved seeing how he developed as a main character. He had issues, but he had a good heart, one that he thought he kept hidden but it was clear to everyone whose lives he touched in his simple but well-meaning ways. There were moments that his chemistry with Stella seemed a bit forced, but by the time these two got to their happily-ever-after, I was a believer. And let's not forget Grams, who truly was the driving force in this story. Never underestimate the wisdom of our elders! Only Love garners 4.5 stars. ♥

Read my reviews for the One and Only series:

Only You (book one) - five-plus stars - My Review

Only Him (book two) - four stars - My Review