Review: In Her Space by Amie Knight (Stars #2) 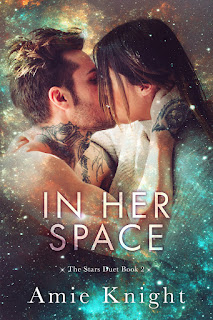 After an exceptional start to the Stars duet, Amie Knight closes this series out well, albeit feeling a tad more rushed than I had expected. In Her Space picks up some time after the events in Beneath Her Stars via the prologue and then everything moves ahead ten years. Livingston Montgomery was no longer the sixteen-year-old girl who loved laying down in the middle of a field surrounded by the far more fascinating field of heavenly bodies above her and the tatted up guy who owned her heart and soul beside her. Adam Nova left behind the nineteen-year-old version of himself years ago, but his heart continues to belong to only one person. They've both changed, and Adam's return makes it clear for all to see that the bad boy from the wrong side is now on the other side of the tracks, thanks to the success he's made from his LUNA app. Adam's got an agenda in mind--he wants to make those who took away two of the most important people in his life from him to pay for what they did. Will Adam's quest for vengeance get in the way of the second chance he and Liv have to finally make a go of a life meant to be together?

I've been looking forward to finding out what sort of future Liv and Adam were going to have after everything that happened to them in book one, and especially after that cliffhanger of an ending that had me on tenterhooks! We get a glimpse of what happened soon after that ending, and it was enough of a glimpse to give me an idea of what Adam had to endure. When these two are within the same area once again, I liked that there was this bit of hesitation and wariness involved, almost as if they were unsure as to how to proceed. Yes, there was never any doubt how much these two still loved each other even after all these years apart but that doesn't necessarily mean they were going to run into one another's arms right away. There are secrets still lingering around, and there were certainly some surprises in terms of supporting characters from the first book. I did like how this second book played out, but it did feel rushed, almost as if it were glossing over certain things in order to get to that happily-ever-after Adam and Liv deserved. I did like In Her Space, just not as much as I loved Beneath His Stars, so 4.5 stars. ♥

Read my reviews for the Stars series:

Beneath His Stars (book one) - five-plus stars - My Review

Purchase In Her Space on Amazon.