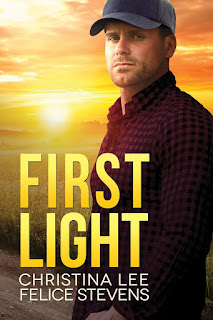 “Being with you has given me more happiness than I thought I deserved. You think it's hard to be around you?” He buried his lips in Oliver's hair. “It's becoming close to impossible to let you go.”


Le sigh. I honestly thought Christina Lee and Felice Stevens wouldn't be able to outdo the M/M/M romance that made me believe that three-sided relationships could, indeed, have all parties love one another equally. When I heard that they were going to follow Last Call up with another visit to a little Pennsylvanian town known as Heartsville, I told myself to temper my expectations. Well, I needn't have worried because this amazingly heartrending yet heartwarming story about the second chances we get in life and love and making them count surpassed my very high hopes (and yes, that was with me trying to curb them already). My heart clenched several times, and that's always a good sign when I'm reading because it lets me know that this story will remain with me.

First Light is the story of two forty-five-year-old men whose lives cross in the most gut-wrenching yet inspiring of circumstances. It's been two years since Oliver Hansen received the heart transplant that saved his life, and he isn't taking that second chance he's been blessed with for granted. He's left behind the everyday stresses of being a lawyer in New York, and now he's on his way to the Pocono Mountains to do something he's wanted to ever since he received Lisa Hendricks's heart--say thank you to her husband, Aubrey. The gruff yet gorgeous farmer, however, mistakes him for someone interested in applying to head up First Light Farm's bakery--the same one Lisa loved working at. The man who once looked like he belonged more in a cityscape than in the countryside seems like the perfect fit for the bakery and to fill the blank space in Aubrey's life, but will fears and doubts lead to broken hearts?

There were a few times that I caught myself wanting to press a palm against my chest to soothe my poor, battered heart. There was nothing easy nor simple about Oliver and Aubrey's story, and these two had to make certain difficult but understandable choices as to how to handle what's developing between them. I more than appreciated the fact that there was a genuine friendship that first took root before it organically grew and evolved into more. Theirs was a relationship that had an air of authenticity to it, and I'm sure it sounds strange considering this is, after all, a fictional tale. I guess what I'm trying to say is that this second Heartsville book shares something the first one had--a verisimilitude that didn't merely inspire empathy for Oliver and Aubrey but stirred my thoughts and emotions, becoming invested in the ultimate outcome. Once again, Lee and Stevens reward their readers with an extraordinary story of first impressions, second chances, and lasting connections. Five-plus stars for First Light. ♥

Read my reviews for the Heartsville series: