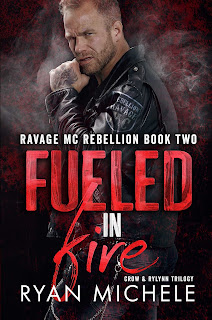 Let me give you two quick reactions to kick off this review of mine for Fueled in Fire, the second book in the Ravage MC Rebellion series from Ryan Michele: Gah! and Ack! The former was due in large part to there being far more on-page time between nineteen-year-old Rylynn Hutton--older daughter of Rhys and Tanner and part of the Sumner, Georgia chapter of the Ravage motorcycle club--and thirty-three-year-old Caleb Moore-Blaine, better known by his road name of Crow and president of the club's Rebellion, Alabama chapter. The cliffhanger in the first book is also resolved to a certain degree that was satisfying. The latter reaction had a heck of a lot to do with the fact that Rylynn and Crow's story went from a two-parter to trilogy, and this isn't me spoiling anything for those of you out there who have yet to dive in to the series since all you have to do is look at the cover that states "trilogy".

Things pick up right where book one left off, and well, I'm sorry but I can't really give anything away in this part of my review out of respect for the wishes of the author--and for fear that I'm going to let something slip out of over-exuberance. Why? Well, in as much as I liked the series starter, this second one went above and beyond my expectations for it. I loved seeing more of Crow and Rylynn together, and while they had a host of issues that they would need to get through, this had their relationship going past it being nothing more than a physical connection. Now, this does end with another cliffhanger, and I do have certain thoughts going on in my head as to what could be happening behind the scenes and how everything will play out in book two. Ryan Michele has promised that Crow and Rylynn's romance will be resolved in book three, and I, for one, can't wait! Five stars go to Fueled in Fire. ♥