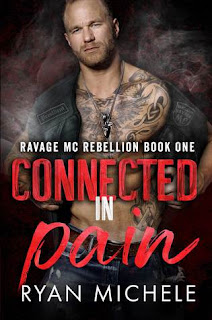 Ryan Michele's got a brand-new series and it's the second spin-off in her Ravage MC universe. Ravage MC Rebellion features the motorcycle club's Rebellion, Alabama chapter, although there are still glimpses at the goings-on over at the original Sumner, Georgia chapter. If you've read Bound by Wreckage, the sixth book in the Ravage MC Bound series, then the main characters here should be quite familiar, and it was almost a given that the next story in the world of the Ravage MC was going to be about them, although I was happily surprised it's become a spin-off featuring this other chapter of the club's over in Alabama. Based on the glimpses we get of the other Rebellion chapter members in this series starter, these guys will be giving the Sumner folks a run for their money.

Nineteen-year-old Rylynn Cameron Hutton is still mourning the loss of her beloved grandfather but she's found unexpected solace in the arms of thirty-three-year-old Caleb Moore-Blaine, better known by his road name of Crow, prez of the Ravage MC's Rebellion, Alabama chapter. But nothing could ever come from them being together, not when lead very separate lives in two different states. Both Rylynn and Crow knew what life in a club was like and it was a life that they both lived to the fullest with very few regrets. Rylynn was drowning in loss and Crow finds himself wading through lies, and while they're both connected in pain, could they be bound by even more?

I'm going to keep this part of my review as brief as possible, mainly because spoilers are a no-no. This was a good beginning to this new series. Crow and Rylynn share a connection that goes beyond the physical, and while their interactions were far fewer than I was expecting or preferred, there was no denying their chemistry. They both have a lot on their plate, to the point that their story doesn't end in this book. Yep, we've got ourselves a cliffhanger! Connected in Pain gets four stars, and now the countdown begins for the second book in this series! ♥