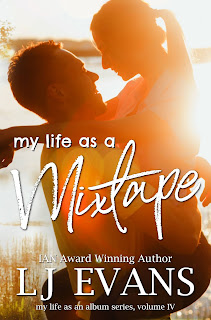 
This series started off with such a feeling of promise, and it was a promise that was kept in the second book. The third one did stumble a bit for me, but this fourth and final one... this went above and beyond my expectations. My Life as a Mixtape is proof positive that LJ Evans has not only grown as an author, but she's given this series the kind of ending it deserves and her readers one last My Life as an Album novel (because you never know if a surprise novella that serves as a catch-up on any of the characters is going to make its way to our e-readers in the future!) to make their hearts flutter in anticipation, clench in empathy, and finally soar in total joy for the main characters.

Twenty-six-year-old Leander Brennan never intended to stay in Tennessee all that long. He was there to help out a friend, and now, he's calling the place home, what with all its legendary Southern charm proving to be very real. Lonnie's also kinda-sorta-maybe smitten by twenty-five-year-old Wynn Nichols, the divorcée he's nicknamed Strawberry Shortcake--the same woman who's helping him keep his world upright after it threatens to be knocked off its axis after receiving life-altering news. Wynn knows what heartache and hardship when you think you're all alone feels like, but maybe this is their chance to see what it's like to have someone in your corner--someone to love if only they'd be willing to take a shot at working at and fighting for much more--to be together, to be a family.

Both Wynn and Lonnie are characters who were introduced in the earlier books, but this fourth can still be safely read as a standalone--but if you're familiar with my past reviews, you know I'm going to encourage you to read the series in order anyway. Having put that out there, I just want to say that when you're a fan of a series, you want every book to be as good as, if not better than, the one that came before it. And yes, I admit that my standards for LJ Evans's debut series rose with each book she released, so that when I read the third one and it wasn't what I hoped it would be, I was left disappointed. But I had faith in this author, and I was already emotionally invested in her series, and now, after having finished this fourth book, I can safely say that I am not just a satisfied reader--I'm a grateful one because this series helped me discover a new author and four books that will stay with me long after I've turned my e-reader off. I'm handing My Life as a Mixtape five-plus stars and the series an average of 4.85 stars. ♥

Read my reviews for the My Life as an Album series:

Purchase My Life as a Mixtape on Amazon.