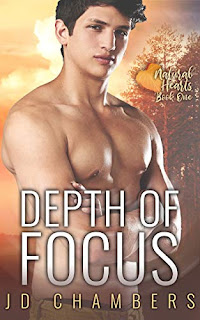 Depth of Focus is the first book in the Natural Hearts series penned by JD Chambers. Set in the small town of Slat Creek, Oregon, we find thirty-two-year-old Whitman Todd, formerly of Vancouver and set to become the town's new head librarian. His love for books and belief that they're more than just a way to pass the time knows no bounds, and he loves the challenges and excitement working at this new job brings, but he can't deny just how lonely he is. He's trying to adjust to life in a small town, and it isn't as easy as it may seem, not when he's more used to the life and pace in a bustling Canadian city like Vancouver. But then he meets twenty-one-year-old Travis Butler, and there's something about the younger man that calls to Whitman. It isn't just that Travis is handsome. Maybe it's because he looks as if he's carrying the weight of the world on his shoulders. You see, Travis thought he had finally left his hometown of Slat Creek behind, but the death of his mother meant he had to return and take care of his seventeen-year-old sister, Caitlyn. Will both men be able to find a place to call home with each other?

Ah, I do love me a slow burn romance with a fair bit of angst in it, and this series starter had the slow burn and angst in spades. This isn't an excessively long read--I finished it in one sitting and in less than two hours' time--but I admit it that it did take several chapters for me to fully get into the story since it felt like it was slow going in the beginning. I liked Whitman and Travis, two very lonely guys who had their respective shares of struggles to deal with but finding solace and support in one another. There are a number of notable of supporting characters, but it was Caitlyn who stood out, and for good reason. She has her own issues and Travis's guardianship isn't your typical older brother caring for his younger sister sort of deal precisely because of those issues. And because I adore dogs--even fictional ones--bonus points go to Mr. Wigglesworth, who was more than a mascot in this book. While this did have a slow start, I did like the story that Whitman and Travis had to tell, and it definitely is a promising beginning to this new series, one that I can't wait to see develop even further. Depth of Focus receives four stars. ♥

Purchase Depth of Focus on Amazon.