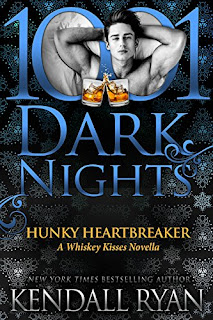 Hunky Heartbreaker is a novella in the Whiskey Kisses series by Kendall Ryan and follows Sexy Stranger, which was released in 2017 and was the story of Lucas Wilder and Charlotte Freemont. In this new release, it's Luke's twin brother Daniel, aka Duke, turn to meet his match, and Valentina (whose last name I don't recall being mentioned here) definitely gives as good as she takes. Just when things are finally turning around for Wilder Whiskey and the bar that they're drunkard of a father left in near ruin before he died, a lawsuit sends both Luke and Duke reeling. Luke's wife, Charlotte, has a solution in the form of her best friend, Valentina, who also happens to be a lawyer. She's every bit as feisty and as beautiful as Duke expected her to be, and the connection they share is one that he, surprisingly enough, wants to explore further. But how can a guy with a reputation for being a heartbreaker from a small Texan town called Shady Grove hope to entice a successful lawyer from Los Angeles to take a chance on them and lay down roots and entrust her heart with him? Can true love bloom absolutely in a matter of just a few days?

I had to remind myself who Luke and Charlotte were, and a quick search on my blog had me pulling up my review for Sexy Stranger. Soon enough, I remembered their story, and in turn, I recalled wanting the other Wilder siblings--Duke and Molly--to also get their stories told. For the most part, I enjoyed Duke and Valentina's romance. I think that Duke needed a woman who had no qualms putting him in his place and making him earn both her love and her trust. Valentina, too, needed a man who made her feel like she was more than just a powerhouse attorney--someone to make her feel womanly and desired. Their first meeting here--post-Luke and Charlotte's wedding--was definitely memorable, and the two did verbally spar a few times, but not as much as I was expecting them to. Also, inasmuch as these two did, indeed, have a connection, I do think that the speed in which they went from individuals who weren't necessarily looking for commitment to a couple that was willing to make major life changes for each other seemed a tad unbelievable. Or maybe I'm just cynical. Four stars go to Hunky Heartbreaker. ♥

Read my reviews for the Whiskey Kisses series: