Review: Let There Be Light by A.M. Johnson (Twin Hearts #1) 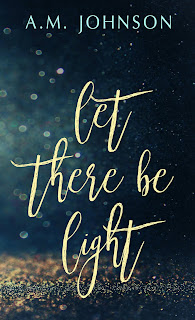 I wanted to tell him this was how it should always be. I wanted him to know, that when his lips were on mine, kissing me until all I could feel was the pulse in my veins, and all I could taste was him, his breath, I'd give anything to lose myself inside his body, or let him lose himself inside mine. If it wouldn't ruin everything about this night, I'd kiss him until he realized he'd wanted the same thing all along. Until my unspoken word became a reality.

Take my poor, battered heart already, why don't you, A.M. Johnson?!? I kid you not when I tell you that Let There Be Light, the first in the new Twin Heart duet and a spin-off of the Avenues Ink trilogy, was one of my number one most anticipated read for this last quarter of 2018. I've read five of Johnson's novels in the past (Sacred Hart, all three of her Avenues Ink novels, and Breakaway), so I knew just how good of a storyteller she was. In short, expectations were high. Add to that the fact that this was going to be an M/M romance, and well, I make no secret of this particular romance sub-genre being my absolute favorite, so let's just say that my expectations had a whole lot of anticipation and trepidation stacked on top of them. No one wants to be disappointed going into a book, more so when it's an author whose writing you're already a slave for. I could have played nice, especially since this was, as far as I could surmise based on checking out Goodreads, A.M. Johnson's first published M/M romance, but again, I knew what this author was capable of. Those expectations? Absolutely obliterated in the best way possible.

Let There Be Light is the story of nineteen-year-old Royal O'Connell, son of Declan and Paige O'Connell (Possession, book one of the Avenues Ink series) and twin brother of Indigo, better known as Indie, whose own story is told in the second book in the Twin Hearts duet, so no, this is not your typical duet that has book one ending in a cliffhanger and involving just one couple. The twins are off to St. Peter's College, a private Catholic college located in the town of Pines Hollow in Oregon. Life away from their family in Salt Lake City, Utah, would take some adjustment, but getting to attend college on scholarships they earned should ensure that brother and sister have their priorities straight. Proving his worth to the swim team, keeping his GPA up, working at the library, and making sure Indie was okay would leave little time for much else. Then Royal meets his team captain's roommate, and his reaction to sophomore Camden Morgan is not what he expected. He isn't all that sure as to what to do with the pull he feels towards the quiet student, but Royal wants nothing more than to dive into everything that is Camden.

A musical virtuoso, Camden Morgan has always surrounded himself with music more than with people. After all, his parents made it seem as if his worth was based solely on that. It was certainly not on who he was as person, not after being made to feel as if there was something abhorrent about him when he was sixteen. Away from a mother who criticized more than she cuddled and a father who couldn't seem to be bothered to care, Camden has preferred his own company compared to that of his peers. The only sounds that have enveloped him are those of the notes and melodies of the music he plays and composes and that of silence...until he meets his roommate's new best friend and teammate on the swim team. Freshman Royal O'Connell is like sunlight that permeates through the darkness that has been Camden's life. He doesn't look at Camden as if he's some weirdo lacking social skills. There's curiosity, and oddly enough, interest of a sort that Camden is afraid to hope could be more. Being with Royal has his heart beating at a peaceful rhythm, but will fears and doubt lead it to be discordant in the end?

Royal and Camden. Camden and Royal. GAH!!! There was simply no way I could not be as emotionally invested as I was. These two seemed liked such opposites, but I think that's what made them fit so perfectly with each other--like slotting into those spaces that would make the other whole. And then there was Indie who may have her own issues to deal with but there's no denying how much she loved her brother, and the same goes for the rest of the O'Connell clan who I loved seeing again in this book. Let's not forget Kai Carter, Camden's roommate and Royal's team captain and closest friend. I'm sensing a whole lot of angst for both him and Indie in book two, and I'm already getting antsy for it. If I haven't said this before in my past reviews for A.M. Johnson's books, this woman's gift for writing--whether it be fiction or poetry--appears to have no bounds. There's a lyrical--pun intended--nature to her writing that I live for, and I love that her stories are angsty yet injected with lighthearted moments. Case in point: Let There Be Light, one of the most unforgettable and stellar books of this year. Five-plus stars times infinity. ♥

Purchase Let There Be Light on Amazon.