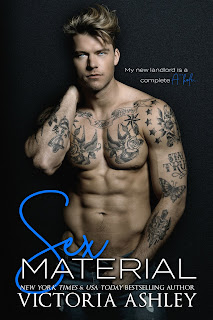 Sex Material is a standalone romance and my first ever read from Victoria Ashley. Jensen Blake has a hard-earned reputation for being a hardass, but then that's also why Blake Construction and Blake Rentals are bringing in as much money as they do. He also happens to have a reputation as "sex material" and it's a rep he's earned by, well, you get the picture. He's in demand either way, but when it comes to the latter, he'll hook up with a woman once and that's it. No repeats, no kissing, no attachments. Does that make him a jerk? Most probably, but he doesn't really care all that much if the women he's been with think of him that way. Long gone were the days he once thought himself capable of far more. And then elementary school teacher Camille Reynolds pushes her way into his life, demanding that he rent to her the home next to her best friend. She just caught her boyfriend of five years kissing her nemesis, and while she has to live with the fact they all work in the same school, she can do something about actually living with her ex. The last thing she needs is to become involved with another guy, but then Jensen isn't exactly the type to become emotionally involved. So why can't these two seem to get enough of one another?

Confession time: if Jensen were an actual guy that I knew, I'd have smacked him...several times! The guy was oftentimes rude and overbearing, but I also had a feeling that he had a story to tell, and I doubted it was a pretty one based on how he treated himself when he was all alone. And well, he won me over. Yep, the guy who wanted the whole universe to see him as a complete and utter jackass won me over...because there was more to him than meets the eye, and it took his meeting Cami for those layers to be peeled back. I loved the character development that Jensen experienced, and the same goes for Cami. She was no shrinking violet, but she truly came into her own once she left her cheating ex and proceeded to go toe to toe with Jensen. I was a fan of the snark between these two, but there was also a whole lot of depth that belied the flirting and back and forth. Had I relied solely on first impressions, I would have put this book down and waited till I was more in the mood later on, but there was always something about Jensen that called to me, and I'm glad I stuck it out. This may have been my first foray into Victoria Ashley's writing, but it will not be the last. Fingers crossed they are all as enticing as Sex Material. 4.5 stars! ♥