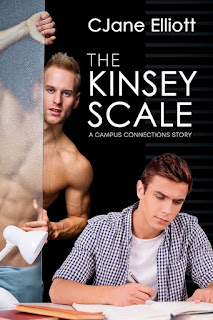 It's been a couple or so years since I last wrote something by CJane Elliott, so I welcomed the opportunity to re-acquaint myself with her writing by way of The Kinsey Scale, the first in her new Campus Connections series. We're introduced to two seniors who also happen to be joint resident advisors for a freshman dorm in a college in Virginia: Eric Brown, a theater major who's from Virginia, and Will Butler, a business major from Georgia. Eric can't help but notice how cute Will is from the moment they meet, and sharing a room together reminds him that he's got to keep his crush in check. After all, Eric is out and proud as a gay guy, and Will has a girlfriend named Jessie whom he spends his weekends with. They make a great team as co-RAs, and their friendship has become important to both of them, but if Eric intends to keep his friendship with Will, he knows he needs to curb his attraction to his roomie, even if that means asking his ex to pretend to still be his boyfriend. His crush has to remain a secret, but it seems that Eric isn't the only one hiding something, but can Eric and Will handle the truth?

I really liked this novella! It was a quick read, but one that wasn't just some fluffy read, although this was more sweet than one would consider sexy. I seriously liked both Eric and Will and I appreciated that it really felt as if these two had forged an honest-to-goodness friendship between them. Sure, Eric was crushing on Will, but their friendship was a wholly separate entity. Here's the thing though: for as close as these two got in the story, they sure as heck needed to work on their communication skills. They were both keeping their respective shares when it came to secrets, and I guess had they been far more open and honest from the get-go--or at least early on--then they could have spared themselves a whole lot of assumption making, and you know what they say about people who assume... But yes, I adored these two young men, and while there were several supporting characters, there was no scene-stealing going on, although Jerry and Doug--Eric's ex and younger brother, respectively--were the standouts and Jesse was certainly memorable. I enjoyed The Kinsey Scale and am excited for the series. 4.5 stars. ♥