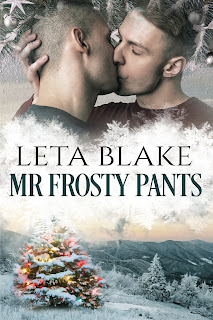 Can't stop thinking about you.

Casey's text summoned a frisson of that morning's magic again, and Joel's heart hesitantly rose in his chest. He typed in his response:

He knew it wasn't enough, but he also knew Casey didn't expect him to suddenly start spouting off about his feelings. Strong as they may be. Wrong as they had always seemed.

Right as they felt now.

Can Leta Blake do no wrong?! Christmas is in the air with her newest release--and it's a series starter to boot!--and along with those holiday feels are the warm fuzzies courtesy of a friends-to-lovers romance. Mr. Frosty Pants is the first novel in Blake's Home for the Holidays series, and readers are introduced to twenty-two-year-olds Casey Stevens and Joel Vreeland, best friends for years before Casey left Knoxville, Tennessee for New York to attend college and ghosted Joel since then. Back for the holidays in their hometown before needing to return to New York after New Year's to finish his final year, Casey decides the time's come to rekindle his friendship with Joel, hoping the years apart hasn't damaged things too badly. Unfortunately, the reception he receives from Joel isn't all that welcoming, and it's clear Joel's earned his nickname of "Mr. Frosty Pants". How can Casey explain that the reason he stayed silent the whole time he was in New York was because of his feelings for Joel, and if they're able to manage becoming friends again, will Casey act on his feelings or will his fears come to fruition if Joel rejects him?

I loved, loved, LOVED this book! From the moment Casey and Joel saw each other again after almost four years after Casey left Knoxville, I was hooked on these two. I found myself eager to see how they would mend their friendship and what sort of "courtship" Casey would employ in order to woo Joel. But I think, more than the wooing, what I loved most was bearing witness to how Joel would open himself to the possibility of truly having what he's always wanted with Casey and embracing the reality that he was more than worthy of that love. I already know how gifted an author Leta Blake is, and she's done such justice to this trope by surpassing the formulaic story line and giving this her own Blake treatment. I absolutely adored Casey and Joel, and there are a number of supporting characters--i.e. best friends and new friends, maybe even an ex--who I wouldn't mind the author developing into main characters as the Home for the Holidays moves forward to its next stories. If you're looking for a holiday romance worth reading, look no further than Mr. Frosty Pants, which receives five-plus stars. ♥