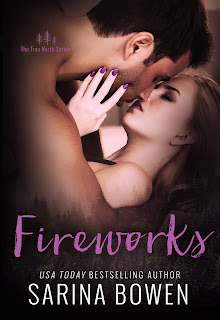 Note: An advanced reader copy was provided by the author via Nina Bocci PR.

Sarina Bowen promised, and boy, did she deliver! Benito Rossi's story is everything I could have ever hoped it could be and then some! Fireworks has that second-chance romance with a great mystery suspense feel that helped tie the two main characters together again. Ben shares his story with his first--and only--love, Skylar Copeland, and while we fans of the True North series will love that there are a number of familiar characters--hello, Shipleys and Rossis!--this is a standalone and it works well as such (because while there are authors who will say that a book is a standalone, it sure as heck doesn't feel like one when you're reading it). Bowen has made it possible for a new reader to pick this book up and just jump in and still feel as if she isn't missing anything vital in terms of the story or the characters. So, yes, if you've never read Sarina Bowen before (gasp!), Fireworks will be a fab jump-off point.

When she was sixteen, Skylar Copeland returned to the state she was born in--Vermont--and to a tiny town called Colebury. Stuck with a mother who couldn't care less about her and a lecherous man who made her want to run as far away as she could, Skye only had one bright spot in her bleak life: eighteen-year-old Benito Rossi. He becomes her sturdiest--and only--pillar of support, basking in a friendship that she can't help but wish was more. And then, he breaks her heart by abandoning her, and when things get worse at home, Skye leaves without a word of goodbye to anyone. It takes twelve years for her to return, and only because her former stepsister asked her for a favor, and if her stepsister wasn't just one of only two people she considered family, she would have refused. Because the last thing Skye wants is to be stuck again in a town she hates...the same town the boy she loved lives in again. But Benito is about to show Skye that has a lot has changed in twelve years, except for one thing: his love for her. However, forces beyond their control are causing trouble, and Skye's past could very well catch up with her.

I adored Benny and Skye's love story! These two endeared themselves to me very early on in the book, and as their story plays out--both the past and the present--I couldn't have possibly been more emotionally invested in them had I tried. I loved Sarina Bowen's flashbacks being written from a third-person perspective because it made it feel as if the beginnings of Ben and Skye's story--as well as another peripheral character's--was being told by someone reminiscing about the past. I appreciated the formatting in the book as well, with the flashbacks in a different font compared to when the story is told in present time. The suspense part of the story had the romantic suspense fan in me cheering. As always, Bowen met my expectations, and when it comes to her books, those expectations are always high. I'm not entirely sure if this is the last in the series, but I hope it isn't since there are a few more side characters I hope will get their stories told. With fingers crossed, I am giving Fireworks a much-deserved five stars. ♥

Side Note: Part of the story tackles drugs--the illegal distribution of it and the addiction it can lead to. I didn't want to make my review sound overly political so I made the decision to add my thoughts regarding this subject matter in this short postscript. The war against illegal drugs in my country has been splashed all over the news, whether it be locally or elsewhere around the globe. Many lives have been taken and sadly, there is no distinction made by the authorities between the distributors and the users. To them, they're all rotten eggs that need to be dealt with, and if you're familiar with the situation here, you know how they've been dealt with. So, the whole drug angle did touch upon something that I hear on the news every. Single. Night. And while I'm going to keep my own political views out of this review, I'm just going to say that I appreciated Sarina Bowen's take on the drug issue in this book.