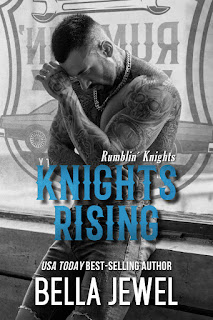 Bella Jewel's new series, Rumblin' Knights, is a spin-off of sorts of her recently concluded Iron Fury MC series and is about the remaining Knight brothers, what with second oldest brother Slater finding the girl he loved and lost in Our Final Tale in the preceding series. Book one in the new series is entitled Knights Rising and is about the oldest of the brothers and the owner of the Rumblin' Knights garage and shop, Lincoln, and a twenty-two-year-old former stripper with a secret, Shania. He's rude, bossy, and overbearing; she's feisty, fiery, and gives back whatever he throws her way with ease. Yet underneath all the dislike swirling around them is an underlying attraction that wafts through. She needs help but she'd rather it come from the Iron Fury motorcycle club her friend's boyfriend belongs to. Lincoln, however, isn't just offering his help--he demands she takes it, but he also wants to know what her motivation for looking for a man with a reputation like Nicolai Peterson may be. Amidst all the heat and tension, Lincoln and Shania give in time and again to their lust, but could it turn into love in spite of all of Shania's secrets?

Sigh. I had high hopes for this book, especially since I loved the author's Iron Fury MC series. Unfortunately, I have very little affection for a male main character who happens to be an asshat and slut shames the woman he's supposedly drawn to plus Lincoln had no qualms boinking every other female who came his way. Ugh. Then there's Shania who may have come off as all badass female in the beginning, but she sure as heck through whatever convictions she may have had out the window whenever Lincoln was around. Sadly, it seems to be something of a habit of hers considering she did the same thing with Nicolai. Both Lincoln and Nicolai treated Shania like crap, and even though she seemed to have a backbone, it melted away as soon as sex was in the picture with each guy. Let me repeat: SIGH. And that thing that Nicolai did to her? Ummm, she could have filed a case against him. YOU HAVE RIGHTS, WOMAN! Quit being a frickin' doormat. Sheesh. Instead of making a stand, she was overly humble and thankful for whatever crumbs were thrown her away. Sadly, this was the norm for her. Two stars for Knights Rising. ♥