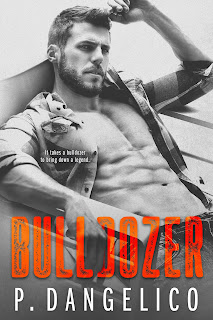 “Try what?” I ask in an equally quiet voice. Reaching out, I dare to run my fingertips over the short beard from the side of his face to his chin. His eyes flutter shut, his thick lashes beaded with water.


I loved Wrecking Ball. I liked Sledgehammer. But Bulldozer? I absolutely adored it and am now in the middle of a major book hangover. This third novel in P. Dangelico's Hard to Love series surpassed any and all expectations I had, and from the moment the main characters realize they're staying in the very same beach house at the Hamptons, I was hooked. By the time they became her klutzy knight who refuses to wear armor and his very reluctant damsel in distress she's rather handle on her own, I was a goner. Can you tell this is my favorite in this rom-com series so far, guessing that there are still more books to come, of course. If not, this is my favorite, period.

Thirty-three-year-old Amanda Shaw has had her struggles, but life has been pretty good over the past few years. She's survived parents who couldn't care less about her or her brothers and she's been sober for three years. Her world revolves around her ten-year-old son, Sam, she has an awesome rescue dog named Ruby, and she co-owns a yoga studio with her best friend Devya. She loves her oldest brother and her sister-in-law, Calvin and Camilla, but she's tempted to strangle them when she finds a hot naked guy in their beach house. Grant Hendrickson may be a superstar in the NFL, but sharing living quarters with the injured and hostile man isn't earning him any points with Amanda. Being in close quarters is bringing out the worst in both of them...but could it also bring out the best if they gave themselves half a chance? Will Amanda and Grant be able to bulldoze their way past each other's walls?

Swoon and snark and a slow burn romance and I'm a giddy bookaholic. Of course, the fact that this story is as fantastic as it is, with a lighthearted touch to it peppered with some angst, had me grinning at certain points in the book, which may have earned me some looks from my best friend. This may have been slow burn but it never felt slow to the point of boring. I loved seeing Grant and Amanda's relationship transition from not-so-friendly housemates to actual friends to more, but I also loved how Grant's relationship with both Sam and Ruby was separate from the one he was creating with Mandy Sue because it made it clear that he wasn't using them to get close to her. There were some absolutely adorable moments in the story, quite a few of which played out in ways I didn't see coming, which earns the author bonus points in my book. There were also a couple of supporting characters who I hope will be getting stories of their own, and atop that wish list of mine is Ronan McCabe. What can I say? The villain intrigued me. Bulldozer's a 2018 favorite and praise JC, I highly recommend it. Five-plus stars! ♥

Read my reviews for the Hard to Love series: