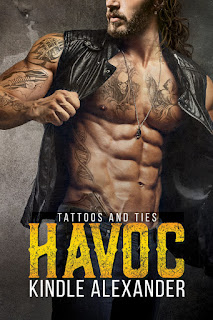 In his peripheral vision, he caught Key's shadow passing around the bar until the length of Key's body pressed heavily against his, boxing him in against the sink and counter as leaned into his neck and, with a possessive growl against his ear, asked, “Are you doin' anyone else?”

Alec just kept his head lowered, eyes clsoed, and what had to be a goofy smile spreading across his lips. His heart was so happy and full. “I'm not doing anyone but you. If that changes, you'll be the first to know. Now say it back.” Alec turned, and the hands resting on the counter on each side of him moved, pushing between Alec and the counter, sliding down to cup his ass.

Reading Kindle Alexander-penned romances makes my heart happy and content. I've got just the right amount of angst to satisfy the angst addict in me and I've got all the romance that the cynical romantic that I am blocks out the cynicism that tends to run through my thoughts. I know it sounds weird, but I have a thing for stories that make me want to chuck that nagging naysayer in my head that wonders how possible happily-ever-afters really are in the books I read, and experience has taught me that Kindle Alexander is one of those authors that simply has me all swoony and sighing with starry-eyed joy by the time I get done reading her books, as proven once again with Havoc, the first book in the author's brand-new Tattoos and Ties series. This was more than the usual MC romance.

Twenty-seven-year-old mechanic Keyes Dixon and twenty-nine-year-old lawyer Alec Pierce don't seem to have all that much in common when looking at them from the outside. Keyes is a member of the Disciples of Havoc earning a good enough living in the garage his father owns while Alec works out of the district attorney's office in Dallas with a federal judgeship on the horizon. But while Keyes may have motor oil underneath his fingernails and Alec's are probably manicured, the two men both know what it's like to have parents who couldn't care any less about them, disgusted by their homosexuality while using them to push their own agendas. Common ground may be difficult--but not impossible--to find, but how much havoc could be wreaked when their worlds inevitably collide?

Le sigh. I loved Alec and Key and how they developed as individual characters as they evolved into a couple. These men weren't as different as they may have looked at the onset, but that didn't mean that they weren't faced with more than their fair share of struggles and issues, especially since they were so used to standing by and taking whatever was thrown their way by their parents, even though that term isn't befitting especially when it comes to their fathers. Not everything is resolved in this novel, but the ending isn't too terrible of a cliffhanger. Instead, it does end on a hopeful note, and now the countdown begins to the second book, which is slated for release in "early 2019". Here's hoping "early" means sometime in 2019's first quarter! Five-plus stars deservedly go to Havoc. ♥