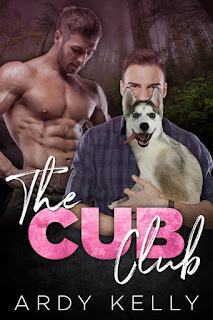 The Cub Club is the debut release from Ardy Kelly, the pen name used by author Robyn Kelly for her paranormal books. This is the year I started reading mpreg romances, but Kelly's book is surprisingly enough the first one I've read that's paranormal. Go figure, but thankfully, this was as good a first foray into paranormal mpreg as I could have hoped for, and I totally wouldn't mind reading even more from Kelly in the near future. Hint, hint, wink, wink.

Two years ago, Steven Miller had a husband he loved dearly, an adopted son they both doted on, and a life they cherished. Now thirty-eight, Steven is a widower trying to continue on without the man he loved most by his side, so when he hears a scream and finds a wolf pup chasing after its own tail in place of Peter, their thirteen-year-old, he knows what he needs to do. And that's how Steven finds himself at the Lone Wolves Ranch and face to face with the pack's alpha, Mack, and from the moment they meet, Mack senses there's something about Steven that makes him extraordinary, but having the truth out there could change their lives...and possibly bring harm to them.

This was a whole lot of fun to read! There was a hint of angst due to the loss of Gary, Steven's late husband, and Steven dealing with all the changes with regards to Peter, but other than those, this was very lighthearted, full of funny and flirty moments. I really liked Steven and Mack as individuals and as a couple, and the rest of the cast of characters definitely brought in a great deal of support for these two and helped make the story an even more fun-filled read. There are a couple of twists in the story that helped push the events that transpired into an interesting but always entertaining direction. I am curious, though, as to whether or not this is the first in a new series and if we'll be seeing some of the more notable secondary characters get their own stories told later on. I would really be on board for that. Regardless, I cannot wait to see what Ardy Kelly has up next for us. 4.5 stars go to The Cub Club. ♥

Purchase The Cub Club on Amazon.