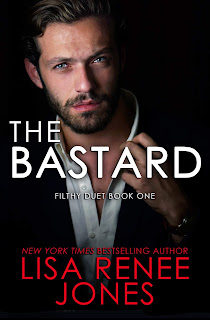 I set my glass down. “About that anger.”

He sets his glass down on the table and his hand slides under my hair, settling on my neck. “I'm angry at you for making me want you so fucking bad that I had to come here.”

Those words are raw and real, vibrating along my nerve endings. “Are you going to make me regret it?”

“There are many things I want to make you feel, Harper, but regret is not one of them.”


Oh. My. God!!! This book! That ending! Gah! Look at me totally unable to form complete sentences to start off this review for The Bastard, the first in Lisa Renee Jones's Filthy duet, which happens to be part of her Dirty Rich universe. While there are characters from Jones's past works, this can pretty much be read as a standalone, so worry not if this is your first ever read from the author or if you haven't gotten around to reading certain series. Jones's brand of romantic suspense shines through this series starter and if you like being kept on your proverbial toes and don't mind one hell of a cliffhanger ending, then strap yourselves in because this one is a true must-read.

Having had the label "bastard" slapped on him by his paternal grandmother--a woman he had never even met before she showed up at the home he shared with his ailing mother--wasn't something he had asked for at the age of sixteen, but years later, Eric Mitchell has lived up to it in more ways than one. He's no longer looking for acceptance or acknowledgment from the Kingstons. He's found family with the men he's served with as a SEAL and he's become a self-made billionaire, having used his genius-level IQ to make money for himself along with working for Bennett Enterprises alongside one of his closest friends. And then Harper Evans comes looking for him. The same Harper Evans he shared an unforgettable moment with when he was thirty and she was twenty-three. She also happens to be his step-sister. Six years later, he still wants her, but can Eric afford to really trust his princess?

I have to stop myself from inadvertently mentioning certain details in this review of mine that could end up spoiling the book for those of you who have yet to read it. There are twists in this story, but then it's penned by Lisa Renee Jones, so twists are to be expected. It's difficult to say who among the characters is trustworthy, maybe save for Eric and Harper, although she's got her own secrets she's keeping from him, and Grayson Bennett and Mia Cavanaugh--yes, the same Grayson and Mia from Dirty Rich Betrayal, which is also where Eric was first introduced. I'm suspicious of almost everyone, which basically means Jones has again succeeded in sucking me into a story and keeping me hooked enough to forgive her for that cliffhanger. Five-plus stars go to The Bastard. Bring on book two! ♥