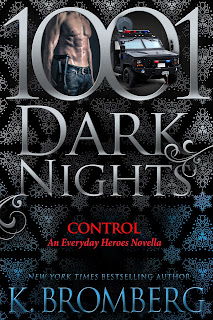 Note: An advanced reader copy (ARC) was provided by the publisher via InkSlinger PR.

K. Bromberg's Everyday Heroes series is back with the release of a novella entitled Control, which features Desi Whitman, a pet spa owner and best friend to Emerson Malone, and Reznor Mayne, SWAT team leader and friends with Grant Malone, who he met while in the police academy together. While part of a series and with appearances from other characters in the three full-length novels, this can still be read and ultimately enjoyed as a standalone.

When an operation goes horribly wrong, the guilt eating away at Reznor Mayne leaves him at a loss as to how best to handle it. His boss suggests he leave San Francisco for awhile and head on to the small California town of Sunnyville to help teach self-defense classes. It's there that Rez meets Desi Whitman, a woman who may seem like she's fine but is haunted by an incident that's now left her feeling vulnerable and unsafe. Rez and Desi have a combative first meeting, but that spark between them is too strong to deny. But can a woman who's never been one to conform and give in to expectations ever have any future with an out-of-towner who likes to be in control?

This was a great addition to the Everyday Heroes series! I enjoyed getting to know Rez and Desi and their clashing personalities made for a wholly entertaining read. I liked that they were both vulnerable individuals who were still trying to come to grips with their respective new normals after what they each went through because it allowed me to empathize with them and see them as more human. As a fan of the series, having some familiar people around and seeing where they were in their own relationships made for a nice bonus. I'm giving Control five stars. ♥

Worth the Risk (book three) - five-plus stars - My Review