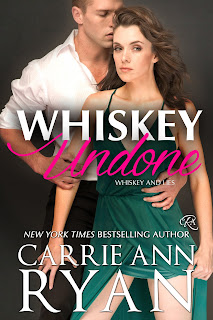 Bestselling author Carrie Ann Ryan ends her Whiskey and Lies series in impressive fashion with the story of a man who thought he had left his past behind and was trying to keep his present as uncomplicated as possible while believing he could never have a future with the woman he's loved for years. Whiskey Undone is all about the eldest Collins sibling, Loch. He's seen how his younger siblings have gone and fallen in love and are now starting their own families. Loch, however, is okay with how his life's been going. He's got his four-year-old daughter, Misty, and he's got his best friend, Ainsley Harris. So what if his feelings for Ainsley have steadily become far less platonic over the years? They've been the best of friends for a decade and even though there's an eight-year age difference between them, Ainsley is the one person Loch knows would drop everything for him and his little girl. He doesn't want to risk losing their friendship, but when he realizes that he could lose her, Loch's control snaps. Regret eats at him, but when old foes threaten his loved ones, will Loch end up regretting not sharing his feelings with Ainsley sooner?

This third and final Whiskey and Lies novel had all the right elements to make it the best of the lot, thereby ending the series on a high note. This didn't have your typical, formulaic sort of approach to the friends-to-lovers trope plus it had this strong but not overpowering element of suspense to it. At the heart of this story is family--both the family that Loch was born into and the one that he and Ainsley have created with Misty. This series is the second one from Carrie Ann Ryan that I've finished and she has consistently given me stories that I can't help but fall in love with, as was the case with Loch and Ainsley's romance. I liked that these two truly did love each other as friends while also having far more romantic feelings that they were trying to keep from one another for fear of affecting their friendship. It's made clear who the villain is in the story as soon as trouble starts, but even with the knowledge of who it is out there, you still want to see what events will transpire and how everything will be ultimately resolved. Overall, Whiskey Undone was an ending that did the Whiskeys and Lies series proud. Five stars. ♥

Read my reviews for the Whiskey and Lies series: