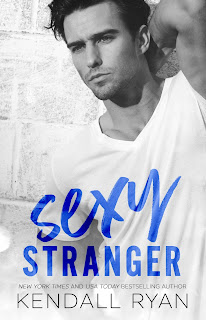 Sexy Stranger is the newest release from bestselling author Kendall Ryan, and it has that sweet smell of promise that I hope to find in books that have the potential of becoming a series. Finding herself literally stalled with very little chance of actually going anywhere farther than the town limits of Shady Grove, Texas, twenty-eight-year-old marketing executive Charlotte Freemont has no choice but to suck it up for however long she's stuck in the tiny town. It seems friendly enough, but one particular sexy stranger doesn't seem to be part of the welcome wagon, pointing out just how out of place she is and that he sees her as nothing more than the pampered princess--duchess--that she appears to be. Charlotte doesn't hesitate to put Lucas Wilder in his place, but she also can't stop herself from noticing just how attractive the frustrating whiskey maker. The twenty-nine-year-old's world is all about his twin brother and their younger sister and their whiskey business. Luke can't stay away from Charlotte and vice-versa, but Luke knows better than to fall for a city girl who would never be okay with country living. Right?

As always, Kendall Ryan has given fans and readers a love story that ticks off a lot of those boxes that keep us glued to our e-reader for the duration. This wasn't an overly long read, but it packed a romantic punch, using the city girl-country boy trope without overdoing it. After all, no one wants to read a book about a very backwards thinking town, and while there are a gossipy few in Shady Grove, it's got itself a bunch of folks that are both entertaining and endearing. I liked that Charlotte was a woman in transition, someone trying to finally find her place in a world that she wants to live in rather than in the world that's been set up by her wealthy parents and the privileged society she was brought up in. There were a few small but appreciated surprises in the story, proving that Ryan added her own touches to keep this as original as possible. Remember when I said this had the potential of becoming a series? Well, with Luke's siblings--twin Daniel, aka Duke, and sister Molly--catching my interest, I'm hoping we'll get their stories down the line. Sexy Stranger made for a heartwarming and very sweet 4.5-star read. ♥