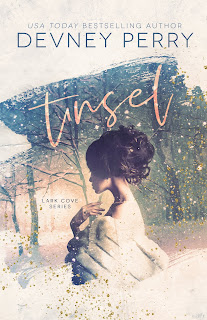 “Dakota,” she called, stopping me.

“I see it. I see it so clearly, and it's magnificent. it takes my breath away.”

“The future.” She turned the knob on the door. “I wish you could see it too.”


I wonder if Devney Perry would consider giving a free pack of tissues with every book she releases because I have yet to read one of hers--not including the Jamison Valley series since I have yet to read those--that hasn't had me either tearing up or outright crying. Tinsel, the fourth and newest novel in Perry's Lark Cove series, may be the one that's evoked the most reaction--aka tears--from me, and I think that's partly due to the idea in my head that this felt like it was the last book in the series. Gasp! Sob! Sigh! Okay, I'm totally assuming that it's the final book--and yes, I know the whole thing about people who assume--but either way, this story about a woman who was seen as nothing more than a frivolous waste of space and a man who was torn between wanting to honor his heritage and needing his freedom put my heart through the wringer, especially in the second half of this wondrously good book.

Growing up, Sofia Kendrick was her family's little princess. Now thirty-two, she continues to live the life of a princess, not having worked a day in her life and known more for her beauty and failed relationships than anything else. When a magazine article pegs her as being a foolish heiress without any personal accomplishments to speak of, Sofia takes a long, hard look at herself and flies from New York to Montana to lick her wounds at her older brother's home. Sofia's sister-in-law, however, has a plan of her own, and it pushes Sofia out of her comfort zone and under the watchful gaze of thirty-two-year-old Dakota Magee, bartender and property owner and landlord. Dakota isn't sure what to make of the clueless woman who knew nothing outside a life of privilege and pampering. They have ten days together, but ten days and nights may be more than enough to be the start of something more.

On the surface, Dakota and Sofia seemed to be such opposites, and yes, maybe in terms of a financial standpoint and their respective childhoods, they were different, but once those layers were peeled back, they also had quite a number of things in common. I loved seeing Sofia truly bloom and find herself and her passion. There was a lot about her that resonated with me, and that's just one of the reasons why this book affected me more than the ones that came before it. Same goes with Dakota. Theirs was a story about finding love and acknowledging the importance of honoring one's family but realizing that creating one's own legacy was just as, if not more, imperative to one's identity. I don't know if Tinsel really is the end of the Lark Cove series, but final novel or not, this book left its mark on me, and it's a testament to Devney Perry's impeccable writing. This snags five-plus stars. ♥

Read my reviews for the Lark Cove series: