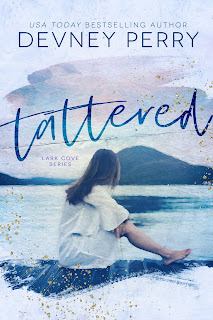 She stared at me for a long moment, letting the meaning of my words echo in the room. When they sunk in—when she realized I wasn't talking about sex—a tear pooled in the corner of her eye. “The impossible.”


I'm only on my second-ever Devney Perry read, and I'm already smitten with this author's storytelling. She opens her new Lark Cove series with Tattered, which is a second-chance love story that begins with a one-night stand in the city of New York to an unlikely reunion in a small town in Montana six years later. Thirty-one-year-old bar manager and artist Thea Landry never expected to see thirty-three-year-old lawyer and philanthropist Logan Kendrick again. For months after their unforgettable tryst, she hoped that he would return to their bar where they had met. They had never exchanged last name or any sort of pertinent information, so finding him in a place as big as New York was an impossibility. The two of them meeting again in Lark Cove, Montana of all places was a stroke of...well, she isn't quite sure what kind of luck it was. The one thing that Thea is sure of most is that she and Logan desperately need to sit down and have a talk. One that involves a baring of the soul--even though the temptation to strip themselves bare and get intimate is difficult to resist. It's time Logan met his five-year-old daughter, Charlie.

Okay, you might think that you've gotten all the important bits and pieces of the story from what I've written above and same with the official blurb that goes with the book. However, trust me when I tell that there's a whole lot more that goes on between Logan and Thea plus Charlie than you think. Remember, Logan and Thea have been leading very separate lives--lives in two very different and distant states. I won't tell you how Logan reacted when he learned about Charlie or whether or not Charlie always knew who her dad was or if Thea had been pining for Logan all this time. Why the heck would I even consider spoiling this book for you? There are a few surprises in the story that are better experienced while you're actually reading the novel instead of this review. What I can tell you is that I loved the story and the characters in equal measure. Logan and Thea were such a likable couple, but they were also flawed. There were moments that I wanted to nudge them in the right direction. Then there were the notable side characters, but let's save them for as the series moves forward. As for Tattered, it gets five-plus stars. ♥