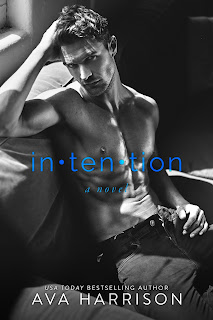 Ava Harrison's in·ten·tion, also spelled intention on Amazon and Intention on Goodreads, is a standalone while also loosely connected to trans·fer·ence and ab·so·lu·tion, which featured Preston Montgomery and Jace Montgomery, who just happen to be the older brothers of thirty-two-year-old Madeline Montgomery, female main character of this new release. She shares this story with thirty-year-old Nathaniel Harrington III, a British heir apparent to Harrington Textiles, the company his beloved grandfather started and has always intended to pass on to him. Unfortunately, Nathaniel's reputation for being a playboy who parties more than someone his age and with his legacy should are making him look like a bad bet to take over the helm of the company and his cousin has no problem sullying Nathaniel's image even more with the board. In order to prove that he knows how to head a company, he buys a failing fashion house and immediately butts heads with Madeline, the CEO and brains behind the Valentina Fisher brand. With his connections, Nathaniel knows he can help Valentina Fisher, but he needs something from Madeline first: she has to pretend to be his girlfriend for the sake of Nathaniel's grandfather and to soften his image. It should be a win-win arrangement for both of them, but what if they lose their hearts first?

This romance was a slow-burn, with Nathaniel pushing all of Madeline's buttons and Madeline sniping at Nathaniel most of the time. But once these two agree on the whole fake relationship thing and mutually acknowledge their attraction to one another, the pacing went at a faster--and more satisfying--clip. I liked how their relationship transitioned from adversaries on the same side to hesitant non-couple with benefits (and not even necessarily sexual in the beginning) to lovers and more. While I confess that it took quite a few chapters for me to fully get into the story and several more to feel engaged with the main characters, once I was emotionally invested, I found myself enjoying the rest of what the book had do offer. I hadn't read any of Ava Harrison's books prior to coming across this title among a list of upcoming events from Enticing Journey Book Promotions, and after becoming intrigued by the blurb, I decided to catch up a bit by reading trans·fer·ence and ab·so·lu·tion. I know that in·ten·tion is marketed as a standalone, but my personal preference is to read books in a series--even an unofficial one--in order for a more well-rounded reading experience. After reading the three Montgomery books, I added the author's Lancaster series to my to-be-read list. I'm giving the first part of the book four stars, while the second part of in·ten·tion receives five stars, resulting in a 4.5-starred rating. I look forward to reading more from this author. ♥