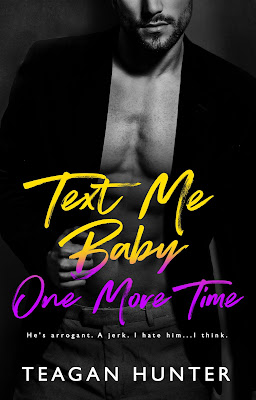 About Text Me, Baby, One More Time
I love you, he said.
Forever, he said.
Turns out, he lied.

When he leaves me high and dry after a cross-country move, I push him out of my life as much as I can, which is hard to do when the guy who broke your heart also happens to be the most famous dude in town.

After a disastrous year, he’s aiming to rehab his reputation, and I just so happen to be aiming for a promotion at the paper.

So, we strike a deal, and it’s a win-win all around.

Besides, what’s the harm in a few dates to charity galas anyway?

I used to love him. Now I hate him…I think. 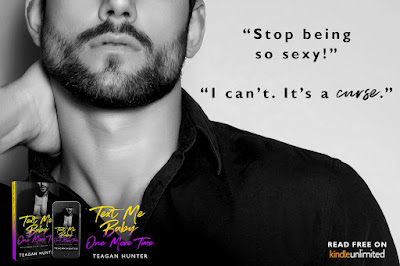 Read my five-plus-starred review of Text Me, Baby, One More Time.

Add Text Me, Baby, One More Time on Goodreads. 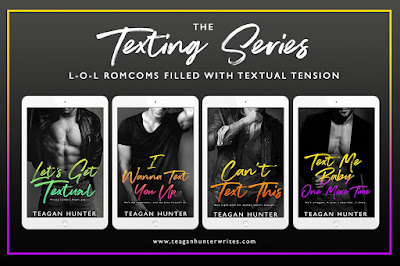 Find the Texting series on Goodreads. 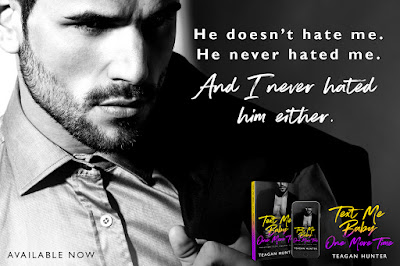 An Excerpt from Text Me, Baby, One More Time
Cinnamon. He smells like cinnamon. I fucking love cinnamon.

I don’t realize he’s reached out to me until his fingertips graze softly over my exposed hip, the touch causing me to jump.

“The bruise—does it hurt? I saw you hit your hip on the corner of your desk when you attacked me.”

I glance down at where his fingers are resting against my skin, and for the first time, I notice there’s a purple mark forming.

He’s right, I did hit my hip, but I was so caught up in the moment that I didn’t care. Then during the hour-long car ride here, I was so focused on trying not to stare at him in his insanely hot baseball cap that I stared at my phone the whole time and forgot my hip was throbbing.

“I forgot about it. I didn’t realize it was starting to bruise.”

“You’ll have to save this dress for one of our later events so it can heal.”

I find his gaze again and turn my face toward his. He’s no longer staring at my hip. His swirling green and brown eyes are locked onto my own.

There’s something in the way he says it, something that grabs at my heart and tugs on the strings. I don’t know if it’s the way he uses my full name—something he hardly ever does—or if it’s the fire in his eyes that’s sending his words straight into my chest.

My lips are his sole focus now.

I could recite the phone book for him and I don’t think he’d ever look away.

Worse? I don’t think I’d want him to.

“How’d you know this dress was going to be the one?”

With reluctance, he draws his eyes up to mine.

“If you think for a second that while you spent the last five years hating me, I’ve been blind to your body…” His hand trails down my hip, dipping way too close to my ass.

God do I hate that I want him to keep going.

“To these curves…” He moves his touch upward, his fingertips teasing me at the base of my back. “To your sheer fucking beauty…”

Light, feathery touches dance up my spine. Goose bumps break out along my skin, though I don’t think he notices.

I don’t realize he’s inched me closer to him with each dance of anticipation along my body until I feel his arousal pressed against my thigh.

His fingers curl around my neck, the touch hard and soft and everything I never knew I wanted, particularly from him.

“I’m not blind, especially when it comes to you, Bucky.”

I watch as his mouth descends toward mine, and I do nothing to stop him.

“Oh, miss! That one is stunning! The young man has a good eye. He—”

The saleswoman pops up out of nowhere just before our mouths make contact.

Shep pulls away, unwinding his arm from around my back, and I miss his warmth more than I’ve ever missed anything in my entire life.

I take three healthy steps away from him, smoothing down the front of my unwrinkled dress, and try to get my breathing back to normal, refusing to look over at him for fear I’ll try to climb my way back into his arms. 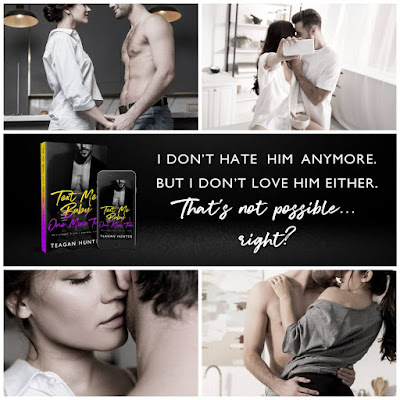 Teagan Hunter is a Missouri-raised gal, but currently lives in North Carolina with her US Marine husband, where she spends her days begging him for a cat. She survives off coffee, pizza, and sarcasm. When she’s not writing, you can find her binge-watching various TV shows, especially Supernatural and One Tree Hill. She enjoys cold weather, buys more paperbacks than she’ll ever read, and never says no to brownies.