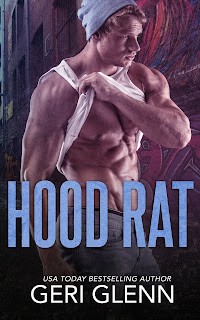 Geri Glenn is a new-to-me author, so I never had the opportunity to read Hood Rat in its original form when it was part of a previously released anthology. The blurb was more than enough to snag my attention, what with the two main characters coming from opposite sides of the track and finding love in the midst of adversity. Twenty-two-year-old Georgia Addington was a modern-day heiress and only child who knew a life of privilege but wanted to be there for kids who didn’t have it as fortunate as she did; twenty-two-year-old Tripp Fletcher was an everyday hood rat—an individual who engages in promiscuous behavior without any money changing hands—who put his three younger siblings first and did whatever was necessary in order to keep them safe and secure. Georgia and Tripp clash when they initially meet, but they soon find middle ground when it comes to Tripp’s brother Carter. Will that be enough, however, for them to have any chance at a future, especially when there are those dead-set on keeping them apart?

This book had a really promising start, especially with all the assumptions Georgia and Tripp had about each other in the beginning. It took me about an hour to read this, and for the first thirty minutes, I liked the direction the story was headed in. Unfortunately, it began to falter in the second half, with a whole lot of drama and angst being heaped on the characters in one blow after another, to the point that it felt somewhat overwhelming. I did like the romance between Georgia and Tripp, as rushed as it may have seemed to be, though not really insta-love. It’s obvious who the villains are, with most of them being caricatures of typical “bad guys”. There were things in the story, as well, that weren’t fully resolved, especially the one involving what Georgia’s mother offered Tripp plus Georgia’s fiancé going all territorial. I don’t know if those issues will be resolved since the “next” book is supposed to be about two supporting characters. Also, the definition of a “hood rat” doesn’t seem to fit Tripp since any sexual activity mentioned here wasn’t due to his being promiscuous but out of necessity. You’ll see what I mean when you read this. I'm giving the first half four stars, the second three stars, resulting in an average of 3.5 stars for Hood Rat. ♥