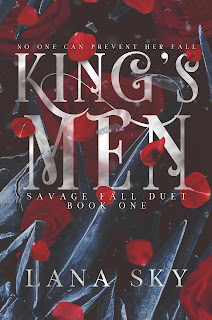 Lana Sky was a new-to-me author going into this book, but she certainly grabbed my attention from the get-go and by the end of King's Men, I was totally ensnared by all things Snowy Hollings and Blake Lorenz. She was the girl who loved the boy that she would later betray, leaving both of them broken forever. What happened to Brandt Lloyd after that betrayal haunts Snowy Hollings even a decade later. The loss of everything her family considered most important--wealth and power--in one fell swoop may have been karma that had been waiting all this time. But if Snowy thought things were already bad, they're about to get far worse upon the arrival of Blake Lorenz, a man who has his sights set on her. By the time Blake's done with Snowy, even an egg from a fairy tale would have fared better by his lot in life.

If you're going into this book expecting a fairy tale-like scenario with a princess waiting for her prince to come and rescue her and then they ride off into the sunset by the end, I'm going to politely suggest that you re-read the blurb for it. This is a dark and heavy read, and it does come with certain trigger warnings, so be aware of what awaits you once you start reading. I will say, though, that the writing itself had me very much impressed. Lana Sky had a story to tell and she told it quite well in my opinion. This ends in a cliffhanger, and the wait for the conclusion is about six or so weeks, and yes, I'm already counting the days till I can get my hands on second Savage Fall book. Five stars for King's Men. ♥