Review: Stuck with You by Roya Carmen 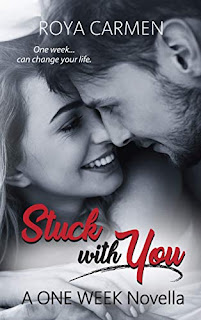 Stuck with You is the fourth and final book in the One Week series from Roya Carmen. We finally get Corrie MacMillan's story and it's got a second-chance feel to it as she's forced to share a cabin with none other than her soon-to-be ex-husband, Jacob. After years of being madly in love with and married to each other, disappointment over failed attempts to have children put a strain on Corrie and Jacob's marriage. Refusing to take away Jacob's dream of becoming a father, Corrie takes what she believes is a necessary step: filing for divorce. Nearly two months later, Corrie's friends decide she needs some time to just kick back and relax, which is why she's in their beachside cabin with her dogs and journal. So, imagine her surprise when Jacob shows up on her doorstep telling her that their friends invited him to the cabin as well. Corrie's stuck with Jacob for a whole week, and in that time, these two will be forced to share the same space and confront their failed marriage, possibly for the last time ever.

This novella was a quick read and it was a good way to wrap up the author's One Week series. One of my favorite things about the story was that Corrie and Jacob were clearly still in love with each other but other circumstances came into play when it came to the demise of their marriage. Sometimes love isn't enough...but on the flip side, sometimes, it's the very thing that makes you realize that everything else comes second and can be handled if you love someone enough. The addition of Alex the woodworker was an interesting and seemingly necessary one for Corrie and Jacob. Their story was fast paced and ended happily and satisfactorily. Stuck with You garners four stars. ♥

One Week in Paris (book three) - five stars - My Review

Stuck with You (novella) - four stars - My Review (posted above)

Purchase Stuck with You on Amazon.