Review: One Week in Paris by Roya Carmen (One Week #3) 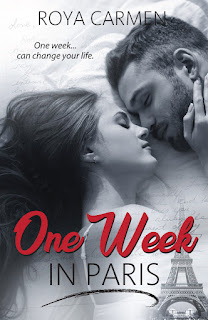 Third time’s the charm! Roya Carmen’s third full-length novel in her One Week series is my favorite one by far, thanks to a fantastic balance of humor and drama and all the good bits in between. One Week in Paris is the story of twenty-eight-year-old Kayla Wilson, a woman who seems to have a pretty great life overall. She loves what she does, has an awesome group of friends, and happens to have a fabulous arrangement with Oscar Cohen, allowing her to meet her physical needs without the stifling trappings of being in a committed relationship. Oscar is sweet and all, but he’s definitely not “the one”, coming off as too immature at thirty-two. Her mother, however, claims to have found her “one” person, which is why Kayla is off to Paris. Meeting her soon-to-be stepfather also means meeting her soon-to-be stepbrother, who just happens to be Matt Moore, the boy who tormented her high school years. Maybe the apple doesn’t fall far from the tree, or maybe Matt’s changed in the decade since she last saw him. Either way, Kayla wants to make sure her mom doesn’t make a mistake and gets her heart broken…or will Kayla’s heart break as well?

There was so much to like about this book! It can totally be read as a standalone, but since I did read the first two books before it, I must say that Kayla’s story is the one that easily claimed my heart. Kayla was smart and sassy and she had her priorities straight and knew what she wanted out of life. Of course, life throws more than one curveball her way, and while she doesn’t exactly get everything right, the girl definitely learns a thing or two on her unexpected path to her own happily-ever-after. I’m not going to say who she ends up with; after all, wouldn’t that be the ultimate spoiler of spoilers? But, what I will say is that the guy she does end up giving her heart to was the one I was absolutely rooting for. There was much more to him than meets the eye, and he deserved a happy ending just as much as Kayla did. Have I made you curious with my vagueness? If you’ve yet to read a Roya Carmen novel, check out One Week in Paris. Five stars. ♥

Purchase One Week in Paris on Amazon.