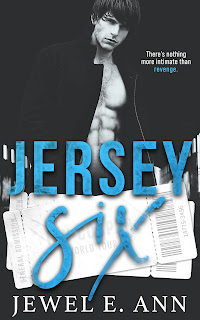 Jersey Six is the newest standalone from Jewel E. Ann, and as expected, she's weaved a wholly original story with touches of romance, mystery, and suspense. The titular character is a twenty-four-year-old woman who bounced from one foster home to another as a child before she landed with the Russells, a couple that made Jersey feel like she had found a family--that made her feel like she could finally dream of living like a normal teenager. But that was a dream that only lasted several months before it turned into a nightmare beginning with the hit-and-run deaths of her foster parents. Eight years later and she's befriended by a man named Chris scarred by burns over most of his body and suffering from amnesia. Jersey isn't in the market for new buddies, but when Chris mentions bits and pieces of information that seem to be connected to the deaths of her foster parents, she decides this could be the perfect time for her to avenge what happened to them and the misery she was forced to live with afterwards. She's trained to fight and knows how to defend herself, but nothing could've truly prepared her to take down Ian Cooper, thirty-two-year-old beloved rock star and gorgeous guy in general. Is she the hunter or the prey?

I'm on the fence with this book. The writing is, without a doubt, quintessentially Jewel E. Ann. There's a quirkiness to the story itself and Ann's storytelling in general that I appreciate, especially with a genre like romance that's bombarded with new releases day in and day out. Let me start with my favorite thing about this book: the main characters. Jersey wasn't the sort of woman who was willing to simply roll over and do whatever was asked of her. She had the sort of strength that was borne of necessity, having to be as independent and self-sufficient as she was at a young age. As for the male main character--who I won't be mentioning by name because I'm trying to avoid being all spoilery in this review--I liked that there was a great deal of depth to him--that you get far more than what you glimpse on the surface. What stops me from giving this book a higher rating, however, is that I saw the twists coming, and while there are times wherein I still look forward to seeing how everything is revealed even when I've already figured stuff out, there was just something here that had me holding back. So, admittedly, my enthusiasm did wane while I was reading Jersey Six, but the author's writing is, as always, one of a kind. Four stars. ♥