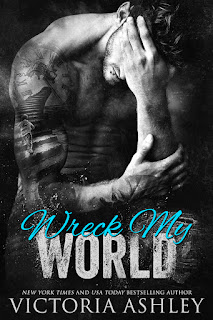 This book was so much more than I expected it to be and hoped for. Wreck My World is a standalone novel and the latest release from bestselling author Victoria Ashley. This romance employed several tropes: falling-for-your-best-friend's-sibling, friends-to-lovers, second-chance... Tropes aside, however, this was a beautifully written love story that had angst (yes!) and all. The. Feels! Dakota Brooks always knew that Easton Crews was the one guy she shouldn't be developing feelings for, now when he happens to be her brother's best friend and not when they have their own friendship that's flourishing. But the heart wants what it wants...and then it ends up broken once the object of your feelings up and leaves. Three years later has Easton returning, but almost everything that had Kota knowing becoming involved with him was a bad idea remains--except for the friendship they once shared. Her father hires him as the newest mechanic for Brooks' Garage--the same garage where Kota is the only female mechanic. Easton wrecked Kota's world, especially her heart, once before; she refuses to let him do it once again.

Oh, but how Victoria Ashley put my heart through its paces with Kota and Easton's story. There's definitely nothing simple about what these two had to go through and endure in order to get to their happily-ever-after, but that just makes their romance all the more worthwhile because it turns into this fabulously heartrending yet heartwarming love story. I seriously adored the cast of characters, headed by two memorable main characters who I couldn't help but fall in love with. It took me about three hours to finish reading their story, and that was all in one sitting because nothing could have taken away my attention from what was going on right in my tablet. The author's writing had me from the get-go, and while this may not have been my first read from Ashley, this was certainly my favorite so far. I don't ask for a lot in the books I read, but I got all that and more with Wreck My World. Five stars. ♥