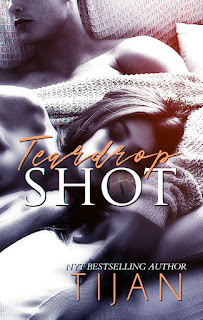 No one answered my questions.

I stayed frozen for a second before lifting my head. I gulped again.

The corner of his mouth tugged up, and holy shit, my heart flopped over in my chest.

“But I'm hoping you're harmless.”

Oh my. I... I'm still at a loss for words, and this is me nearly two weeks after I had first read this story as an advanced reader copy (ARC) and just having re-read the final, published version because this is one of those books that I simply had to have on my virtual bookshelf. At its most basic, Teardrop Shot is a sports romance, but it's more than that. Tijan has created a multi-layered love story about a woman who spent two years creating a future with her soulmate only to spend the next five slowly losing him to something neither of them had any control over, and then struggling to find her footing once again with the friends she lost and forging a friendship with the unlikeliest person ever. It's hearty, with a combination of heartfelt and heartrending, with that Tijan touch of quirk. This awesomely wonderful book has basically just tied itself with Ryan's Bed as my favorite read from this author.

Twenty-seven-year-old Charlie, a woman who cut herself off from those nearest and dearest to her for years but now finds herself reconnecting with them while working at the camp where they all shared happy memories. Everyone's gone through their own changes in life, especially Charlie, but what's remained consistent is her love of basketball; so imagine her shock when she finds out the camp's been taken over for several weeks by her favorite basketball team, which means her favorite player will be around as well: Reese Forster. She knows fangirling would be a definite no-no, and she's pretty sure she'll scare the guy away with her Charlie-patented questions. But Reese is more intrigued than anything by this unique woman who's captured his attention. They become friends, but soon enough, platonic becomes passionate, but he's an NBA star, and she's...Charlie. And that's only the tip of the iceberg on why there's no way either of them should be together. Sometimes, though, life--and love--find a way...

This book was just...extraordinary! Charlie may seem like some ordinary woman who happens to have certain quirks to her, but she's genuinely unlike any other female main character that I've come across in a long time, and I've been reading for four decades, so that says something. The more I got to know her back story, the more my heart broke for her. She was someone who had a habit of putting those who meant most to her first, and in the process, it seemed as if she lost bits and pieces of herself. I loved her circle of friends, but they tended to ignore or roll their eyes when her questions popped about, and it took someone like Reese--someone who went with the flow and actually answered her questions--for her to see that what others saw as weird, he saw adorably out of the ordinary and endearingly entertaining. They were part of what made Charlie Charlie, and could have Tijan paired two more deserving people to have a happily-ever-after?! Just like the actual teardrop shot made in basketball, this book may appear deceptively like a rom-com, but it's so much more than that. Five-plus stars go to Teardrop Shot. ♥