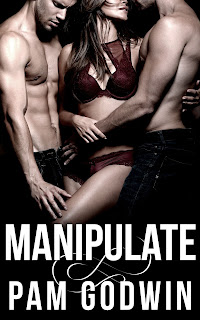 They were a union of testosterone and passion housed in muscle and bone. Watching them kiss was a privilege. Witnessing the love they shared in their eye contact was a precious honor, and they were giving her this intentionally, wickedly teasing her and making her wait.

Their kissing was explosive yet intimate as they stared into each other's eyes and murmured indiscernible words. Then those eyes turned to her.


No one quite does dark romance like Pam Godwin. Her stories never fail to have me on edge, with a tension that's almost palpable enough that my nerves are frayed and my muscles in knots at certain points. So basically, it was par for the course with the sixth novel in Godwin's Deliver series, yet it's the first book that has three main characters instead of the usual two--Petula Gomez, Martin Lockwood, and Ricardo Saldivar. If you're familiar with my reviews, you know that there's always a hesitation on my end when it comes to stories about three-sided relationships (and no, people, I'm not talking about stories that involve a couple and how one of them cheats). I'm quick enough to get on board a story about threesomes and how it's all about the sex factor. Relationships involving commitment and emotions, however, are a whole different animal. I need to be convinced that whatever is going on between all parties concerned is on equal enough footing that I believe the feelings are requited on all sides and that it's more than just sex for all three. It's safe to say that Godwin had me convinced with Manipulate.

When Petula Gomez's sister, Vera, reaches out to her yet again to ask for help, Tula knows better than to answer the call, but answer she does and it's the beginning of a nightmare she never saw coming. She crosses the border that leads her to Mexico, but instead of finding her sister with her hand out to receive Tula's help, it's Tula who ends up with her hands cuffed as she's led away by Mexican police. Arrested and charged with drug smuggling, she knows it's a case of mistaken identity, but not even her being an American from Arizona saves her from ending up in Jaulaso, a Mexican prison that truly becomes her cage, one she won't be leaving any time soon, not unless she admits her guilt, allowing the US embassy to request for her to be transferred to an American prison to serve out the rest of her sentence. She does what she has to in order to survive, even pledge loyalty to the leader of the cartel that controls Jaulaso for protection. When she's told to seduce and manipulate Martin Lockwood and Ricardo Saldivar, new inmates that have the cartel suspicious, the last thing she expects is to fall for them, but fall she does. Martin and Ricky are irresistible temptations, but is she still manipulating them or is she the true pawn?

I know that there are readers who don't quite enjoy the darker elements of romance novels, but for those who curious enough to dip a toe or ten into the proverbial pond, you can't go wrong with Pam Godwin. Her Deliver series has a strong following, and while it doesn't have fluffy moments that involve the usual trappings, there is very much a romance in each of the books. In the case of Tula, Martin, and Ricky, the connection among the three of them is an undeniable one. There's already a set history between Martin and Ricky, what with being the best of friends who have a stronger connection that goes beyond friendship. When Tula enters the picture, the dynamic between Martin and Ricky shifts, making things even more interesting than they already are. I loved having this ringside seat to everything that was happening with these three and the different nuances with the variety of relationship dynamics involved--Tula with Martin, Tula with Ricky, Tula with both; Martin with Ricky and vice-versa and them with Tula. The series arc regarding human trafficking is still very much present all throughout the book and how that ties in to the three made for some intense and suspenseful moments. Godwin made me believe that Tula, Martin, and Ricky belonged together, and that is what ultimately made Manipulate a five-plus-starred novel. ♥