Review: On the Surface by Nikki Ash (Imperfect Love #3) 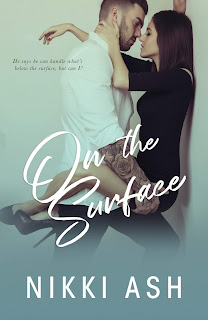 Celeste Leblanc finally gets her story told in the third novel in the Imperfect Love series penned by Nikki Ash. At first glance, she didn't seem to be someone that I was going to like when she was introduced in the series starter, The Pickup, although she seemed far  But like everyone in life--whether real or fictional--she had a story to share, and it definitely provides more depth to this woman that seemed to make such an effort to push people away and keep them a distance. There's no denying how much of a success Celeste has made of her professional life and at first glance, she's reaped the rewards of all that hard work. From model to fashion designer, her name is synonymous with beauty and looking your best, and one glimpse at the life she leads, and it seems likes she's living the dream. But Celeste is lonely, yet to find the sort of love and contentment her closest friends now have. Then someone from her past comes back, and the last thing she wants is to have anything to do with Jase Crawford. They may only have been involved for a week, but that was enough time for his betrayal to leave its mark. Learning he's a single dad makes staying away even more imperative, but Jase isn't about to do her any favors by doing the same thing. He makes it known that he isn't going anywhere, but will he still want her when he sees the real her?

This was a really great read, one with a second chance romance feel to it plus the single parent trope. I love it when stories like this don't have the main characters jumping into each other's arms straight off and then glossing over what cause their separation in the first place. It's been a decade since they were last in each other's lives, but neither one's forgotten that one week they spent together or the heartache that followed. The reason for them going their separate ways was, well, a matter of making assumptions, but I'm not going to go into details, not when I think it would be better if you actually read the book. Nikki Ash has done a fantastic job with the series, bringing in angst with some lighthearted moments, but always focusing on that happily-ever-after at the end. I felt for both Celeste and Jase, although admittedly, more the former than the latter. If you were one of those readers who's familiar with the series and wasn't a fan of Celeste's, trust me, you're going to want to know her back story. She really has more going for her than what's on the surface--and that's what the book's about: a reminder to look deeper and remember that there's more to a person at times than what they show the world. Jase and Celeste were a wonderful couple to get to know and their fab love story had all the feels. On the Surface receives 4.5 stars. ♥

Purchase On the Surface on Amazon.